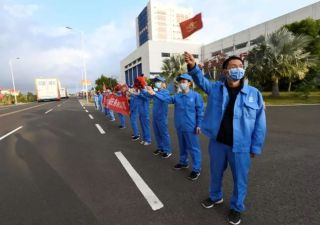 Masked employees welcome a Long March 5B rocket to the Wenchang spaceport in February 2020. The booster is scheduled to launch a Chinese orbiter and rover to Mars in July 2020.
(Image: © CASC)

China is planning to launch its first solo interplanetary mission in July, but the new coronavirus has severely hindered and slowed activity in the country. Will the COVID-19 outbreak keep China from launching for Mars?

Chinese authorities enacted a range of travel and enforced quarantine measures in January to combat the spread of infection. This meant many employees, including those in the space sector, could not return to work.

However, the situation currently looks good for China’s Mars mission, which will send both an orbiter and a rover to the Red Planet. Work at facilities dedicated to manufacturing and testing spacecraft and launch vehicles has continued despite the impact on the workforce.

—What are the symptoms?

—How deadly is the new coronavirus?

—How does it compare with seasonal flu?

—How does the coronavirus spread?

—Can people spread the coronavirus after they recover?

This was possible with the introduction of precautions such as the use of masks, banning the use of elevators, serving lunch in individual boxes and disinfection of buildings.

And the Xichang Satellite Launch Center in Sichuan province has already resumed launches.

Wenchang, China’s new coastal spaceport on Hainan Island, is currently preparing for launches of two new rockets. One of these, in April, will test a new crewed spacecraft and lay preparations for a space station in Earth orbit.

This is good news for China’s Mars mission, which will launch from Wenchang in July.

The huge Long March 5 rocket that will launch the mission had a successful return to flight in December. Its previous launch in July 2017 ended in failure and grounded the rocket for over two years.

The rocket for the Mars mission is progressing well, with successful engine tests carried out in January. The mission rover underwent its space environment testing in late January. Despite the lack of official comment on the mission, China’s first fully homegrown expedition to Mars appears to be on track. (The nation's Yinghuo-1 Mars orbiter launched with Russia's Phobos-Grunt sample-return mission in November 2011 aboard a Russian Zenit rocket. But the Zenit never made it out of Earth orbit.)

And plans for more-imminent launches are proceeding at Xichang and Wenchang. China also seems to be sticking to plans to launch more than 40 times in 2020.

One commercial space company in China has been hit hard by the virus, however. Launch provider Expace has its production centers in the city of Wuhan, which is the epicenter of COVID-19 and has now been in lockdown for over 40 days. Global Times reports that Expace is unlikely to fulfill its plans to conduct four or five launches of its Kuaizhou rockets in the first half of 2020. Expace is subordinate to CASIC, a giant state-owned defense contractor and missile maker.

Though new cases of coronavirus infection in China are dropping, the situation is changing globally. Both the European Space Agency and NASA have implemented measures to protect their employees, with the latter recently testing telecommute plans and issuing a mandatory work-from-home directive for one facility, the Ames Research Center in California's Silicon Valley. There is no indication thus far of any high-profile missions being hit by the virus.

In addition, a number of global space conferences have been canceled following the growing numbers of cases in places such as the United States. For example, last week, the organizers of the annual Lunar and Planetary Science Conference in The Woodlands, Texas, canceled the meeting, which was scheduled to take place from March 16 to 20.