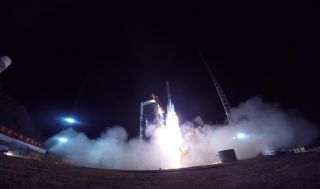 "This is a milestone for China's space industry development," said Wu Yansheng, board chairman of the China Aerospace Science and Technology Corporation (CASC), in a CASC statement.

Related: China On the Moon! A History of Chinese Lunar Missions

China's first Long March rocket, the Long March 1, launched on April 24, 1970 carrying the country's first satellite, Dongfanghong-1, according to the state-run Xinhua news service. That first booster could launch up to 661 lbs. (300 kilograms) into orbit.

China's Long March rockets are built by the country's Great Wall Industry Company, which  has developed 17 variants of the booster over the years. Its biggest, the heavy-lift Long March 5, is capable of launching  27.6 tons (25 metric tons) to low-Earth orbit (LEO) and 15.4 tons (14 metric tons) to the more distant geostationary transfer orbit.

The country has also recently developed smaller rockets, the Long March 6, Long March 7 and Long March 11, and has plans to make its Long March 8 booster reusable. A super-heavy-lift Long March 9 booster is also in the works, according to SpaceNews.

The Long March series is not China's only rocket family, but it is responsible for over 96 percent of the country's launches, CASC officials said in the statement.

It took China 37 years to launch its first 100 Long March missions, they added.  The next 100 followed in just over seven years, with the final 100 missions launching in the last four years.

To date, Long March rockets have launched more than 500 spacecraft since 1970, according to CASC officials.