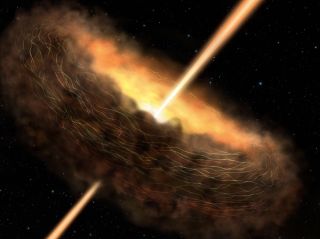 Supermassive black holes lurk in the hearts of most galaxies.
(Image: © NASA/SOFIA/Lynette Cook)

Black holes are engines of destruction on a cosmic scale, but they may also be the bringers of life. New research on supermassive black holes suggests that the radiation they emit during feeding frenzies can create biomolecular building blocks and even power photosynthesis.

The upshot? Far more worlds roaming the Milky Way and beyond could be suitable to life, the researchers speculated.

For their new study, published May 24 in the Astrophysical Journal, scientists created computer models to look at the radiating disks of gas and dust called active galactic nuclei, or AGN, that swirl around supermassive black holes. Some of the brightest objects in the universe, AGN form as a black hole's gravity binds matter. As that matter swirls around a black hole, it releases incredible amounts of light and radiation.

Since the early 1980s, scientists have suspected that this radiation would create a dead zone around an AGN. Some researchers even proposed that such an AGN could explain why we haven't seen any complex extraterrestrial life towards the center of the Milky Way. Our galaxy has a monstrous black hole at its center, called Sagittarius A*. Previous studies have found that within 3,200 light-years of a Sagittarius A*-sized AGN, X-rays and ultraviolet light could strip the atmospheres from Earth-like planets. (The Milky Way is nearly 100,000 light-years across.)

"People have mostly been talking about the detrimental effects [of black holes]," Manasvi Lingam, lead author on the study and an astronomer at Harvard University, told Live Science. "We wanted to reexamine how detrimental [the radiation] is … and ask ourselves if there were any positives."

The researchers' models suggest that worlds with atmospheres that are thicker than Earth's or those far enough away from an AGN to retain their atmospheres might still stand a chance of hosting life. At certain distances, there exists a galactic Goldilocks zone that gets just the right amount of ultraviolet radiation.

At this level of radiation, the atmosphere wouldn't be stripped away, but the radiation could break apart molecules, creating compounds that are necessary for building proteins, lipids and DNA — the cornerstones to life, at least as we know it. For a black hole the size of Sagittarius A*, the Goldilocks region would extend approximately 140 light-years from the black hole's center, where 1 light-year is 5.9 trillion miles (9.5 trillion kilometers).

The scientists also looked at the effects of the radiation on photosynthesis, the process by which most plants utilize the sun's energy to create sugars. And AGN emit enormous amounts of that key ingredient — light. This would be particularly important for plants on free-floating planets, which have no nearby host star to provide a light source. Astronomers have estimated there could be around 1 billion such rogue planets drifting in the Goldilocks zone of a Milky Way-like galaxy, according to Manasvi.

Calculating the area over which AGN could power photosynthesis, the scientists found that large portions of galaxies, particularly those with supermassive black holes, could have AGN-powered photosynthesis. For a galaxy similar to our own, this region would extend around 1,100 light-years out from the center of the galaxy. In small, dense galaxies called ultracompact dwarfs, more than half of the galaxy could reside in that photosynthetic zone.

Taking a fresh look at the negative effects of the ultraviolet and X-ray radiation in these zones, the scientists in the new study further found that the adverse consequences of an AGN neighbor have been exaggerated in the past. Bacteria on Earth have created biofilms to protect themselves from ultraviolet rays, and life in ultraviolet-heavy areas could have developed similar techniques.

X-rays and gamma-rays, which AGNs also spew in enormous quantities, are also readily absorbed by Earth-like atmospheres and would likely not have a large influence on life, the researchers said.

The scientists estimated that the damaging effects of AGN radiation likely would end at around 100 light-years out from a Sagittarius A*-size black hole.

"Looking at what we know about Earth, it does suggest that maybe the positive effects seem to be extended over a larger region than the negative effects," Lingam told Live Science. "That was definitely surprising."