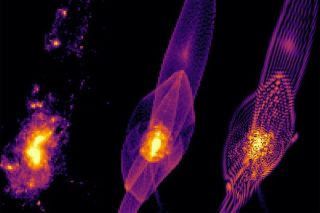 (Image: © Courtesy of the researchers)

Scientists have finally found traces of the axion, an elusive particle that rarely interacts with normal matter. The axion was first predicted over 40 years ago but has never been seen until now.

Scientists have suggested that dark matter, the invisible matter that permeates our universe, may be made of axions. But rather than finding a dark matter axion deep in outer space, researchers have discovered mathematical signatures of an axion in an exotic material here on Earth.

The newly discovered axion isn't quite a particle as we normally think of it: It acts as a wave of electrons in a supercooled material known as a semimetal. But the discovery could be the first step in addressing one of the major unsolved problems in particle physics.

The axion is a candidate for dark matter, since, just like dark matter, it can't really interact with regular matter. This aloofness also makes the axion, if it exists, extremely difficult to detect. This strange particle could also help solve a long-standing conundrum in physics known  as "the strong CP problem." For some reason, the laws of physics seem to act the same on particles and their antimatter partners, even when their spatial coordinates are inverted.This phenomenon is known as charge-parity symmetry, but existing physics theory says there's no reason this symmetry has to exist. The unexpected symmetry can be explained by the existence of a special field; detecting an axion would prove that this field exists, solving this mystery.

Because scientists believe that the ghostly, neutral particle barely interacts with ordinary matter, they have assumed that it would be hard to detect using existing space telescopes. So the researchers decided to try something more down to Earth, using a strange material known as condensed matter.

Condensed-matter experiments like the one the researchers conducted have been used to "find" elusive predicted particles in several well-known cases, including that of the majorana fermion. The particles are not detected in the usual sense, but are instead found as collective vibrations in materials that behave and respond exactly as the particle would.

"The problem with looking at outer space is that you cannot control your experimental environment very well," said study co-author Johannes Gooth, a physicist at the Max Planck Institute for Chemical Physics of Solids in Germany. "You wait for an event to happen and try to detect it. I think one of the beautiful things of getting these concepts of high-energy physics into condensed matter is that you can actually do much more."

The research team worked with a Weyl semimetal, a special and strange material in which electrons behave as if they have no mass, don't interact with each other and are split into two types: right-handed and left-handed. The property of being either right- or left-handed is called chirality; chirality in Weyl semimetals is conserved, meaning there are equal numbers of right- and left-handed electrons. Cooling the semimetal to 12 degrees Fahrenheit (minus 11 degrees Celsius) allowed the electrons to interact and to condense themselves into a crystal of their own.

Waves of vibrations traveling through crystals are called phonons. Since the strange laws of quantum mechanics dictate that particles can also behave as waves, there are certain phonons that have the same properties as common quantum particles, such as electrons and photons. Gooth and his colleagues observed phonons in the electron crystal that responded to electric and magnetic fields exactly like axions are predicted to. These quasiparticles also did not have equal numbers of right- and left-handed particles. (Physicists also predicted that axions would break conservation of chirality.)

"It's encouraging that these equations [describing the axion] are so natural and compelling that they are realized in nature in at least one circumstance," said MIT theoretical physicist and Nobel laureate Frank Wilczek, who originally named the axion in 1977. "If we know that there are some materials that host axions, well, maybe the material we call space also houses axions." Wilczek, who was not involved in the current study, also suggested that a material like Weyl semimetal could one day be used as a kind of "antenna" for detecting fundamental axions, or axions that exist in their own right as particles in the universe, rather than as collective vibrations.

While the search for the axion as an independent, lone particle will continue, experiments like this help more traditional detection experiments by providing limits on and estimates of the particle's properties, such as mass. This gives other experimentalists a better idea of where to look for these particles. It also robustly demonstrates that the particle's existence is possible.

"A theory first is a mathematical concept," said Gooth. "And the beauty of these condensed-matter physics experiments is that we can show that this kind of mathematics exists in nature at all."

The research was published online Oct. 7 in the journal Nature.

Editor's Note: This second paragraph of this story was updated at 10:05 a.m. E.D.T. to clarify that what was found in this study was a mathematical signature of an axion and not a dark matter axion found in space.