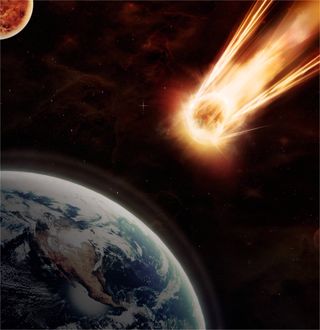 It's only a matter of time before a big, dangerous asteroid lines up Earth in its crosshairs, experts say.
(Image: © The Aerospace Corporation's Center for Space Policy and Strategy)

The emergency preparedness activities now underway to combat the coronavirus pandemic offer insight about our readiness to deal with a dangerous incoming asteroid, experts say.

Humanity can learn some valuable lessons about planetary defense from the things that have gone right and wrong in the coronavirus fight, according to asteroid scientists and an authority on emergency preparedness.

"Speaking for myself, the novel coronavirus is a good case study of mistakes to avoid when planning to prevent an asteroid impact," said Thomas Jones, a scientist, author and retired NASA astronaut who flew on four space shuttle missions to Earth orbit. He chairs the Association of Space Explorers' Near Earth Objects Committee.

The global response to the virus has illustrated some cooperation through the World Health Organization, Jones said, but as some of the data given to the WHO has been spurious, false or incorrect, that organization's response was stymied and delayed somewhat.

Most nations have chosen their own path — granted, with international expertise and consultations — in responding with their own interests uppermost. Resources and manufacturing priorities were allotted individually, nation to nation, with subsequent delays, Jones said.

"This is understandable, but it's not a good model for dealing with an asteroid impact threat. A fragmented, staggered and uneven response to an impact threat is a recipe for delay and inaction, foreclosing options to deflect the asteroid," Jones told Space.com.

"We'll need transparent sharing of all observations of the object, and international vetting of all the impact predictions," he added. "Any required deflection campaign will only succeed if an internationally supported consortium develops and carries out the effort, with ongoing, shared insight into every step of development."

Jones said that, without that shared confidence, nations will defend themselves unilaterally, leading to lost time, wasted resources and increased risk of failure. "Open cooperation gives us the best chance to assess the threat properly, mount a series of credible deflection missions (if needed) and turn away an impact catastrophe."

There are some parallels between the pandemic the globe is experiencing and the hazardous asteroid concern, said Lindley Johnson, NASA's Planetary Defense Officer and Program Executive of the space agency's Planetary Defense Coordination Office (PDCO).

"The first is, of course, the importance of early detection," Johnson told Space.com. "The earlier you detect the threat, the more chance you have to take actions to prevent it before it can have significant impact."

Then there is the same aspect of being adequately prepared for an event that, at some point in the future, is inevitable. A devastating asteroid impact is going to happen, just as another dangerous disease is going to emerge, Johnson said. "The question is just when. This makes prudent actions important to be prepared — stockpiling of medical supplies and equipment in the case of pandemics; having adequately tested several measures for deflection in the case of asteroids."

Johnson added that funding needed for planetary defense, perhaps about $200 million per year, "is probably significantly less than what might be prudent for preparation against a pandemic."

Related: How life on Earth could come back from a sterilizing asteroid impact

Linda Billings, a consultant to NASA's Astrobiology Program and the PDCO, also points to technological preparedness, particularly the need for a space-based near-Earth object survey telescope. "The small-bodies community has been saying this for years," she said.

Furthermore, better ground-based observing systems and more missions to demonstrate deflection techniques are also needed, Billings said. As for lessons learned given the pandemic, "be prepared and don't wait till a disaster occurs," she said.

In the communications area, Billings said "there must be clear, concise, consistent messaging, which we do not have in the pandemic situation." The near-Earth object awareness strategy and action plan lays out "who's in charge of what in the event of an actual impact threat," she said.

David Ropeik, a retired Harvard instructor and author of the book "How Risky Is It, Really? Why Our Fears Don't Always Match the Facts" (McGraw-Hill Education, 2010), also sees similarities with the COVID-19 pandemic and a space rock collision with Earth.

"Potential asteroid impact and pandemics both demonstrate that low probability/high consequence events are really hard to get people to care about and prepare for," Ropeik said. "We've known about both for a long time, but knowing and caring are two different things."

By definition, rare events are infrequent, and as time passes since the last one, the threat loses its emotional valence, Ropeik said. "Without that it turns into an abstraction, only an idea that doesn't feel viscerally real and threatening, and that's what it takes to get the major investments required to prepare for something with large consequences. Sadly, and as proof of the point, this has been said many times before, about many risks, almost always in retrospect," he said.

Only when the threat maintains its emotional valence, Ropeik added, does preparation begin to match the danger.

Ropeik said that Hong Kong was more ready for the COVID-19 pandemic because of how hard severe acute respiratory syndrome (SARS) hit there nearly 20 years ago. We are more prepared for an asteroid impact because of the 2013 Chelyabinsk asteroid event in Russia, he said, and before that the spate of catastrophe movies featuring some near-miss controversies.

"When the fear is deep enough, and real enough, we prepare more. Usually, however, it's not," Ropeik concluded.

Leonard David is the author of "Moon Rush: The New Space Race," which was published by National Geographic in May 2019. A longtime writer for Space.com, David has been reporting on the space industry for more than five decades. Follow us on Twitter @Spacedotcom or Facebook. This version of the story published on Space.com.