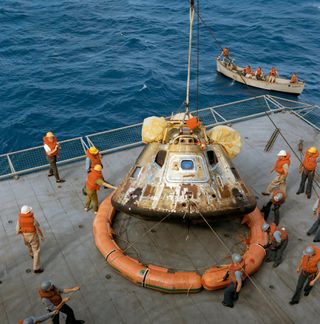 The Apollo 11 command module, seen here as the astronauts returned from the moon, is one of the artifacts highlighted in a new Smithsonian Channel series.
(Image: © NASA)

A new Smithsonian Channel series celebrates the artifacts that led to Apollo 11's triumphant moon landing 50 years ago this July, and shares behind-the-scenes stories from the mission.

"Apollo's Moon Shot," which premieres Sunday (June 16), tells the story of the NASA moon-shot program through archival footage, interviews and artifacts from the Smithsonian's National Air and Space Museum. The series will air weekly on Sundays at 8 p.m. EDT (same time in PDT).

"This six-part series tells the entire story of America's moon program through newly restored archival film, and unique access to the artifacts of Apollo," the Smithsonian Channel said in a statement.

Some of the artifacts shown on screen include the camera used by John Glenn, who was the first American astronaut to achieve orbit in 1963, during the Mercury program; the command module of Apollo 11, which is currently on tour at the The Museum of Flight in Seattle for the anniversary; and space boots worn during Apollo 17, the last crewed mission to land on the moon, in 1972.

"The series reveals the stories of the men and women who made the mission possible," Smithsonian added. "Stunning, rarely seen footage of each mission is combined with NASA's oral histories taken directly from the astronauts' debriefings upon their return to the Earth."

The series will also include a forthcoming Apollo moon shot augmented-reality app that displays the full timeline of the Apollo program in relation to key moments portrayed in the series.

The premiere episode on Sunday, "Rocket Fever," will take viewers back to the dawn of the space race in 1957, when the Soviet Union launched its first satellite, Sputnik. This event spurred the United States to move quickly into spaceflight and led to President John F. Kennedy's 1961 call to land American astronauts to the surface of the moon by the end of the decade.

"The early days of the space race were full of urgency, uncertainty, huge risks and even bigger rewards," Smithsonian said in another statement. "Witness NASA's first team of astronauts endure a crash course in space travel, presented through rare archival footage, interviews and objects on display and in the vaults of the Smithsonian's National Air and Space Museum."