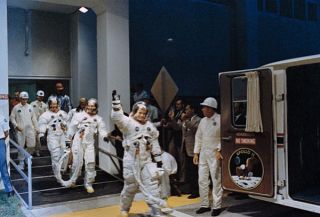 Apollo 11 astronauts Michael Collins, Buzz Aldrin and Neil Armstrong travel to the Saturn V rocket, ready to lift off and head for the moon.
(Image: © NASA)

If you weren't born when the first crewed moon-landing mission launched — or you want to relive the experience — check out USA Today's two augmented reality apps that will bring you step by step through history.

USA Today will publish an eight-day "live" broadcast of the Apollo 11 mission between July 16 and 24, coinciding exactly with the moonbound mission's real-time milestones 50 years ago. You can follow the broadcast on the 321 Launch app, which is available in the App Store for Apple devices or on Google Play for Android.

The newspaper will also offer an augmented reality app on the USA Today app. Starting July 9, the app will show off the mighty Saturn V rocket, the 363-foot (110 meters) behemoth of a booster that brought crews of three people to the moon's neighborhood. Users will learn about every stage of the launch sequence and about the crewed and uncrewed launches of the rocket.

Apollo 11 kicked off six additional moon landing attempts, with five more succeeding; the Apollo 13 mission aborted en route to the moon after an explosion, but the craft returned to Earth safely.

NASA is looking to return humans to the moon for the first time since 1972, now targeting 2024 for the mission, at the directive of President Donald Trump's administration.