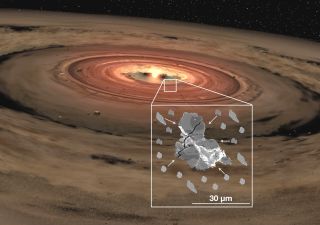 An artist's depiction of the early solar system. In the inset, small particles stick together to form larger particles.
(Image: © NASA/JPL-Caltech/Jangmi Han)

They sound like some sort of mandatory nutritional supplement added to food, but they're actually chunks of mineral studding the interiors of space rocks — and they could help scientists pinpoint when the solar system began to form.

Those pockets of rocks are called calcium-aluminum-rich inclusions, or CAIs, and scientists have studied microscopically small ones in a stunningly pristine meteorite in order to peer back into the early days of our planet and everything around it. The findings represent additional evidence that it didn't take long for solids to stick together and settle out of the cloud of hot debris surrounding our sun, the very first step toward forming asteroids and planets.

"The time scale for coagulation is really short compared to the age of the solar system," Ming-Chang Liu, a cosmochemist at the University of California, Los Angeles, and lead author of the new research, told Space.com. "It's a very efficient process."

Cosmochemistry uses precise chemical ratios to pick apart different stages of that timeline — think carbon dating, but more complicated. "It's trying to figure out the chronology of events that happened while planets are forming, while asteroids are forming," Maitrayee Bose, a cosmochemist at Arizona State University who has studied the same meteorite, told Space.com.

"Once we know this is a chain of events, we can model how our solar system may have formed," Bose said. "We can then take our solar system as one system we know well and then apply it to exoplanets if necessary."

On the other hand, some of the information scientists have about solar system formation has come from searching for exoplanets. A particularly notable example is the case of a star called HL Tau; scientists were able to see gaps in the debris ring surrounding the star, signs that big chunks of preplanet were sticking together.

"We know planet formation probably took place early, but exactly how early, we don't know," Liu said. "The HL Tau images were actually quite shocking for astronomers and planetary scientists, because never did they expect that hints for planet formation could be found in something that's as young as 1 million years old."

But looking to other solar systems can help only so much, since astronomers have to peer into these worlds across vast distances. In our own neighborhood, researchers can study solar systems up close, and therefore at a smaller scale. And in the case of these meteorite inclusions, looking at smaller objects also means looking earlier in the process of solar system formation, since scientists are pretty sure accretion needs more time to build up larger structures.

"Observations couldn't do any better job," Liu said. "That's why meteorites come into play." And, more specifically, CAIs, the calcium- and aluminum-rich chunks studding the cookie of the meteorite itself, come into play.

Scientists have spent plenty of time looking at CAIs, but until this new research, they've been stuck with those that are perhaps on the scale of millimeters across. Liu and his colleagues were able to analyze much smaller CAIs, those closer to the width of a human hair.

"You're looking at really, really tiny objects now," Bose said. "The fact that they were able to even do these measurements … is pretty spectacular, I would say." It's a standard trajectory for new instruments to gradually improve their resolution, but that doesn't make cosmochemists less excited about the prospect of analyzing these data when they arrive.

And the people who make those measurements may have more than scientific discoveries to anticipate. "Zapping samples makes me feel good," Liu said. "You can't see the ions, but you can see a hole forming on your sample, so it's actually quite soothing."

The research is described in a paper published Wednesday (Sept. 11) in the journal Science Advances.