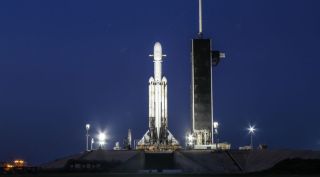 LOS ANGELES — Air Force officials continue to press their case against legislative efforts to allow more than two companies to receive contracts in the next phase of the national security space launch program.

"Two is the right number from a mission assurance perspective," Col. Robert Bongiovi, director of the Launch Systems Enterprise Directorate at the Space and Missile Systems Center, told SpaceNews on Tuesday.

The House Armed Services Committee's version of the 2020 National Defense Authorization Act directs the Air Force to create more opportunities for new entrants to compete in the Phase 2 Launch Service Procurement, and requires that the Air Force set aside $500 million to help companies build launch pads and get their rockets certified.

The Air Force plans to select two providers in 2020 to split all national security launches from 2022 to 2026. The HASC bill would allow other launch providers — if they have certified vehicles that meet Air Force requirements — to compete for Phase 2 missions beyond the first 29 launches. The field of competitors includes United Launch Alliance, SpaceX, Blue Origin and Northrop Grumman.

Bongiovi in an interview insisted that having more than two launch contractors in Phase 2 puts missions at risk because of the time and cost of integrating new providers. Satellites potentially would have to be modified to integrate across more providers. "Stability begets mission success," he said. "We want to leverage competition. But in a risk balanced way."

The HASC provision would disrupt Phase 2 planning, said Bongiovi, because the Air Force could not predict when the first 29 launches would be completed. "Our manifest changes year to year," he said. "I don't know where 29 is going to leave us. If we don't have a fixed period, we can't plan for the next transition."

HASC Chairman Adam Smith has criticized the Air Force's strategy for narrowing the playing field at a time when more competitors are entering the market. Smith has argued that inserting new competitors after 29 missions should not cause any disruptions to the program, but Bongiovi disagrees. Two providers "is about how many we can understand in the level of detail we need to understand," he said. "We also don't want to be in a position when we have to add a third competitor and the market doesn't support it. Then what do we do?"

The Air Force will reopen the competition again for Phase 3, starting in 2025, and will award Launch Service Agreement cost-sharing contracts to companies so they can invest in their vehicles and infrastructure. "It's more prudent to do the investments focused on Phase 3," he said. "If the market has kept them going and they're available in 2025, we give them money to meet our requirements and we're in a better position."

Bongiovi said the Air Force likes to see more competition in the market, "but you can overdo that." A requirement to recompete Phase 2 launches after the first 29 missions would "increase our mission risk way more than what would be acceptable," he said. "We absolutely agree we need to sustain competition. The way to do that is with the investment line focused on Phase 3," he said. If the commercial market can sustain three or more providers, they would be have an opportunity to win Phase 3. And if there's only enough commercial work to keep two providers afloat that would be an "OK outcome," said Bongiovi, "because we don't want to be in a position where we're subsidizing industry"

Bongiovi said this provision is problematic for the Air Force because it could expose the service to having to make up $1.5 billion available to SpaceX and perhaps other companies that win missions in Phase 2 after the first 29 launches. "The way the language reads, I don't believe it's just for people who win Phase 2 and don't have an LSA. It's also for those who don't win Phase 2," he said. "There's a scenario out there that you could end up awarding up to $1.5 billion of contracts," he said. "We agree 100 percent that investment is required. But we think investments should focus on needs for Phase 3."

In its version of the 2020 NDAA, the Senate Armed Services Committee does not see eye to eye with the HASC. The SASC calls for the Phase 2 competition to stay on schedule and for no more than two providers to be selected.

The next hurdle for Smith is to get the language approved by the full House when the NDAA reaches the House floor in July. Any differences with the Senate bill have to reconciled in a House-Senate conference.