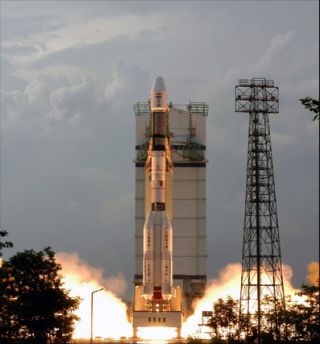 BANGALORE - A team that analyzed data from the failed launch of India's Geostationary Satellite Launch Vehicle (GSLV) has found the primary cause of the Dec. 25 mishap was the "untimely and inadvertent snapping" of a group of 10 connectors located at the bottom of the rocket's Russian supplied upper stage.

The Indian Space Research Organisation (ISRO) said in a Dec. 31 statement that the vehicle's performance was normal up to 47.5 seconds after liftoff. It then began to stray from its planned orientation angle, which resulted in higher structural loads than the vehicle was designed to handle.

The rocket, which was carrying a telecommunications satellite, began to break apart about 58 seconds into the flight and was destroyed by command at 64 seconds. [8 Biggest Space Misfires of 2010]

ISRO said some of the connectors that snapped carried command signals from the onboard computer near the top of the vehicle to the control systems for the four L40 strap-on boosters that augment the rocket's first stage.

These connectors are intended to be separated by command 292 seconds after liftoff but their "premature" rupture stopped the flow of control commands to the boosters, resulting in the loss of control of the vehicle, ISRO said.

"The exact cause of snapping of the set of connectors — whether due to external forces like vibration or dynamic pressure — is to be analyzed further and pin-pointed," ISRO said.

The statement said ISRO has formed a committee to carry out an in-depth analysis of the failed flight as well as of the previous six GSLV missions and recommend corrective actions. The committee is chaired by G. Madhavan Nair, former chairman of ISRO, and has 11 experts drawn from within and outside ISRO.

ISRO also has created a panel led by K. Kasturirangan, also a former ISRO chairman, to look into the future of the GSLV program and the vehicle's reliability for upcoming missions including the Chandrayaan-2 mission to the moon, which is slated for launch in 2013.

ISRO plans to complete these reviews by the end of February, the statement said.