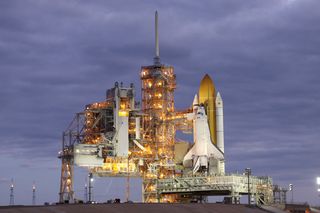 Discovery was slated to blast off from a seaside pad here atthe Kennedy Space Center at 3:29 p.m. EDT (1929 GMT), but persistent rain inthe area, and a gloomy outlook that called for an 80 percent chance of stormyweather, convinced NASA officials to stand down for the day.

"If it looked like there was any possible chance ofgiving it a shot, then I think we would have chosen to proceed withtanking," said Pete Nickolenko, NASA's assistant shuttle launch director."But, it was really very clear today that it wasn't looking to be our dayweather-wise."

Even though shuttle technicianscan fill the orbiter's external fuel tank in the rain, clearer conditions arerequired for launch and for safety precautions in the event of an emergencyReturn To Launch Site (RTLS) abort situation. [GRAPHIC:NASA's Space Shuttle ? From Top to Bottom]

"The launch forecast continues to be poor, with solidrain showers forecasted for throughout the day," Nickolenko said. "Theteam concluded it was not prudent to pick up with tanking today. So, at thispoint, we're going to be inserting a 24-hour delay in our countdownprocedures."

The shuttle is now slated to launch no earlier than Friday,Nov. 5 at 3:04 p.m. EDT (1904 GMT). Discovery's launch time moves up earliereach day to keep the shuttle on target to meet its destination ? the InternationalSpace Station ? two days after liftoff.

"We'll be watching winds tomorrow, and see what launchwind and headwind issues may be ? if any ? for us," Nickolenko said."I fully expect that the team should be ready to give it a shottomorrow."

Today'sweather delay comes after several other hurdles prevented Discoveryfrom launchinginto space on Monday (Nov. 1) as originally planned. Two minor gas leaks forceda two-day delay to allow time for repairs. Then, an electrical glitch in abackup computer for one of the shuttle's three main engines was discoveredTuesday, adding another day of delay.

Discovery'sfinal mission will deliver critical spare parts to the station, as well as astorage room module and a humanoid robot to assist the crewof the orbiting laboratory.

The flightwill mark Discovery's 39th trip to space and NASA's 133rd shuttle flight as theagency prepares its three-orbiter fleet to retire in 2011. Discovery will bethe first of NASA's shuttles to be retired when it returns to Earth after thismission.

Discovery's11-day mission will include two spacewalks, during which mission specialistsDrew and Kopra will perform maintenance tasks on the exterior of the station.