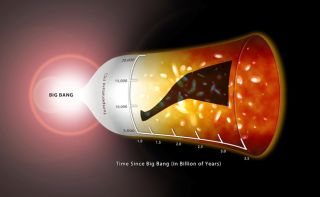 A graph showing the temperature of the intergalactic medium when the universe was between one and three billion years old, overlaid on an artist's impression of the emergence of galaxies over the same period. The shaded region shows the range of possible temperatures measured from the team's data. The warming occurred at a time when the growth of galaxies was in full swing.
(Image: © Amanda Smith/IoA)

The quasar light had

One of the lightest