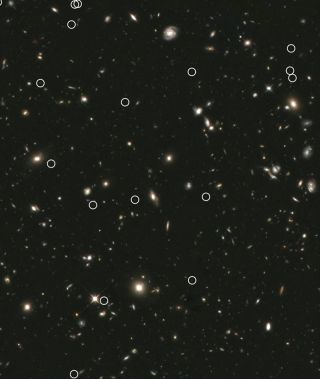 This is a true-color image from the part of the Hubble Ultra-Deep Field. It has allowed researchers to identify a new population of the most-distant known galaxies (white circles) present when the universe was less than 800 million years old. These galaxies may be responsible for ionizing intergalactic gas early in the universe's history.
(Image: © R. McLure/J. Dunlop/R. Ellis/B.Robertson/D. Stark [Full Story])

Researchersare building a better picture ofone of the most important changes in the early universe a process thatliftedthe cosmic fog from the dark, early universe.

Anew study of observations by the HubbleSpace Telescope has revealed that the earliest known galaxies, presentsome 800million years after the Big Bang 13.7 billion years ago, may haveemittedenough ultraviolet light to strip electrons from (or ionize) thehydrogen gasbetween galaxies.

Beforethis so-called re-ionizationof the universe, hydrogen gas absorbed light just like fog ona dark road,limiting the distance over which the earliest galaxies could have beenobserved.[Hubble photo of the ancient galaxies]

Foryears, researchers have believed that asthese galaxies coalesced into larger and larger structures. Theirsubsequentultraviolet glows ionized hydrogen in bubbles around them, which grewandeventually overlapped until essentially all the intergalactic mediumwasionized and transparent.

"Thathas been the outstandingquestion," Brant Robertson of the California Institute of Technology inPasadena, Calif., told SPACE.com. "At what point in time do galaxiesproduce enough of these ionizing photons to keep the electrons andprotons inthe universe unbound?"

Althoughthe universe actually began in anionized state following the BigBang, this first period of ionization lasted for only about300,000 years,until electrons and protons cooled enough to form hydrogen atoms. (Thishydrogen formation generated photons that we know today as the cosmicmicrowavebackground.)

Whatfollowed was a period known as thecosmic Dark Ages, during which the universe's vast clouds of cloudhydrogenslowly condensed to form the first galaxies. From studies of neutralhydrogendetected in the light from distant quasars, astronomers knew thatre-ionizationmust have been complete by about a billion years after the Big Bang.

Hubble'sWide Field Camera 3, in operation since May 2009, has allowedastronomersto pinpoint the infrared signatures of more than 50 galaxies that dateto 800million years after the Big Bang.

Theresearch is detailed in the Nov. 4 issueof the journal Nature.

Bydetermining whether these ancientgalaxies released sufficient ultraviolet light to re-ionizethe universe'sintergalactic hydrogen, researchers could rule out other possibleexplanationsfor re-ionization, such as radiation from matter falling into massivegalacticblack holes, or the annihilation of hypothetical dark matter particles.

Intheir new analysis, Robertson and hiscolleagues first used the recent Hubble data to estimate the totalnumber ofancient galaxies. Then they took information about the color of lightfromthose galaxies to estimate the sizes and intensities of the starscontained inthem, which yielded the number of ultraviolet photons generated by eachgalaxy.

Finally,based on data for closer galaxies,the researchers estimated that some 10 to 20 percent of thoseultravioletphotons would have made it out of their galaxies to re-ionizeintergalactichydrogen.

Theresults suggest there were likely enoughultraviolet photons to re-ionize the universe in the first 800 millionyears ofcosmic time, although uncertainties remain.

Robertsonsaid one of the major uncertaintiesin their calculation was the number of early galaxies, which currentlydependson Hubble's surveys of a small section of sky.

Butas Hubble collects data over a widerportion of the sky, that uncertainty will decrease.

"It'sa very exciting time,"Robertson said. "In the next couple of years we'll be able to know ifthere are enough galaxies to re-ionize the universe."