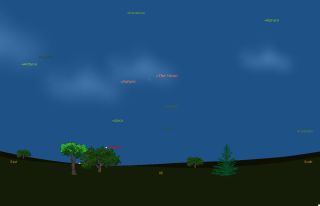 This sky map depicts the location of the bright planet Venus on the morning of Nov. 3, 2010 as seen from the northeastern U.S.
(Image: © Starry Night)

Planetariums,observatories,weather offices and perhaps even police stations should be prepared toreceivea bevy of inquiries during the next couple of weeks concerning astrange"UFO" that will soon be making appearances low in the eastern skyjust before sunrise.

Theunusual lateness of sunrise mayadd to the confusion for skywatchers, since it coincides with thesuddenarrival of the bright sky apparition. But there's no need to bealarmed.

Thatbright light in the sky isonly the planet Venus, which returns to visibility Wednesday, Nov. 3.

Thissky map shows where tolook to spot Venus on that date.

Venus'bright arrival comes in themidst of likely darkness for those who are heading out to work andschool inthe morning. [Gallery:Photos of Venus]

Thisis an artifact of daylight savingtime . Since daylight saving time wasextended into the first week of November  in 2008, sunrises atthis time occurlater than even in the dead of winter.

Indeed,for some parts of thecountry, the sun doesn?t rise until after 8 a.m. local time.

Thatmeans that countless millionsare starting their days with the stars as their morning companion.Perhapsyou?ve driven to work under the cover of darkness, or waited at a busor trainstation and have looked around and gotten acquainted with the starrybackground.

Ifyou?ve been glancing toward theeast-southeast part of the sky, you probably haven?t noticed anythingparticularly noteworthy or eye-catching.

Butit will all change quitesuddenly on the morning of Nov. 3.

Onthat morning, about a half-hourbefore sunrise, a dazzling silvery-white star-like object will suddenlyappearjust above the east-southeast horizon. It?s likely to take more than afewpeople by surprise, since it simply wasn?t there on previousmornings.  And, onfollowing mornings, it will appear noticeably higher on thehorizon.

Itclimbs nearly 10 degrees high (aportion of the sky that can be covered by your clenched fist held atarm'slength) at sunrise on Nov. 6 ? the final morning of daylight savingtime. Clockswill be set back one hour the following day and sunrises will come anhourearlier, but by then, Venus will be firmly established as a dazzlingharbingerof sunrise.

Venuswill be 20 degrees high atsunrise on Nov. 16, and 27 degrees on Nov. 25 as seen from NorthernHemispherelocations around  40 degrees north latitude.

AsNovember ends, Venus rises a fullthree hours before the sun and hangs almost 30 degrees high at sunrise.Venuswill brighten impressively throughout the month. For early morningcommuters, whowill likely wonder about this brilliant luminary bursting upon thepredawnscene, Venus will no doubt call attention to itself.

Somemight wonder why Venus will becomeso quickly established as a dazzling morning entity compared with thoseoccasions when it seems to take many days or weeks ? sometimes evenmonths ? totransition into the evening sky.

Thedifference lies in Venus' positionrelative to the Earth. When Venus moves from the morning sky into theeveningsky (called "superior conjunction") it?s located on the opposite sideof the sun relative to Earth.

Locatedat about 160 million milesfrom Earth on these occasions, Venus is moving at its slowest speedagainst thebackground stars. What?s more, it is also moving in the same apparentdirectionagainst the stars as the sun ? to the east.

Soin the days leading up to andthen even after superior conjunction, Venus continues to languish inthe brightglare of the sun.

Finally?  and very gradually ? Venusmoves just far enough away from the sun to be glimpsed for a shorttime, lownear the western horizon shortly after sunset.  Perhaps aftera number ofweeks, the planey climbs high enough to become conspicuous to all inourevening sky.

Atinferior conjunction (which iswhere Venus was on Oct. 28), the planet passed between Earth and thesun. Itwas also only about 25 million miles from Earth ? more than six timescloserthan it is at superior conjunction.

SoVenus is moving much fasteragainst the background stars. And, most importantly, as seen from ourEarthlyvantage point, the sun and Venus appear to be moving in oppositedirections.

Whilethe sun plods along towardthe east, Venus is racing away to the west, which allows it toliterally appearto "bolt" into the morning sky and become readily established as apredawn beacon over the span of just a week or two, as opposed to manyweeks inthe evening.

Thisphase of Venuslooks most remarkable through a telescope, especially earlyin November. Observerswith optical aid will be treated to the marvel of a huge (close to anarcminute long), but wire-thin, crescent (only a few percent illuminated)whenVenus is first sighted after inferior conjunction.

Youcan even see the crescent with7x50 binoculars, and some folks with exceptional eyesight might even beable toperceive it without optical aid.

Soif you hear about any strangeUFO sightings being made in the early morning hours during the comingweeks, atleast you now know what it likely is.

Joe Rao serves as aninstructor andguest lecturer at NewYork's Hayden Planetarium. He writes about astronomy for The New YorkTimes andother publications, and he is also an on-camera meteorologist for News12Westchester, N.Y.