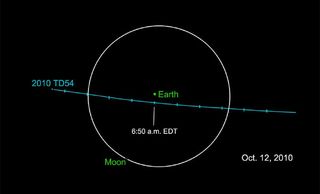 Asmall asteroid will zip close by Earth Tuesday (Oct. 12), but poses no chanceof hitting the planet ? or even entering the atmosphere, NASA has announced.

The small asteroid is about20 feet (6 meters) wide and expected to drift silently by Earth instead ofcreating a dazzling fireball in the atmosphere. The asteroid is too small tosurvive all the way to the ground, even if it was aimed at Earth, scientistssaid.

Asteroid Watch is a public outreach effort by NASA's near-Earth objects officeat the Jet Propulsion Laboratory in Pasadena, Calif. The group of scientistsregularly posts asteroid flyby and sighting alerts on Twitter under the nameAsteroidWatch.

Asteroid2010 TD54 may be visible to skywatchers with moderatetelescopes, but will be hard to spot, NASA officials said. Seasoned asteroidhunters may be the best equipped to catch a glimpse, they added.

The asteroid will fly well inside the moon's orbit of Earth, andeven pass just above some of the highest satellites, which fly in geostationarypositions about 22,370 miles (36,000 km) above Earth. For comparison, theInternational Space Station flies at an altitude of about 220 miles (354 km).

When space rocks like Asteroid 2010 TD54 encounter Earth'satmosphere, they can burn up in spectacular fire balls, but never reach theEarth.

Biggerasteroids about 460 feet (140 meters) wide can cause widespread damage aroundtheir impact sites, but for global devastation much larger space rocks wouldhave to strike the Earth.

NASAroutinely tracks asteroids and comets that fly near Earth, using a network ofground and space telescopes as part of its Near-Earth Object Observationsprogram. According to the most recent report, the program has tracked 85percent of the largest asteroids that fly near Earth and 15 percent ofasteroids in the 460-foot class.

NASAis also planning to tackle a new space plan ordered by President Obama to send astronauts to anasteroidby 2025. The mission, agency officials have said, could help scientists betterunderstand the composition of asteroids and develop improved methods ofdeflecting them before they endanger the Earth.

SPACE.comSenior Writer Clara Moskowitz contributed to this report. This story has been updated to reflect the asteroid's designation as 2010 TD54.