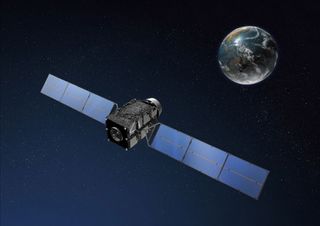 TheMichibikisatelliteentered its quasi-zenith orbit early Monday, Japanesetime, the country's space agency announced. The orbit stretches from alowpoint of 20,268 miles to a high point of 24,202 miles.

Thequasi-zenith orbit, designed to maximize Michibiki'scoverage of Japan, has an average altitude equal to the distance ofgeosynchronous satellites from Earth. Its longitude is locked in at 135degreeseast longitude.

Michibikimeans "guiding" or "showing the way" in Japanese.

Thesatellite has three more months of technology testsand commissioning before it enters service.

Michibikiblasted offSept. 11 from the Tanegashima Space Centeron an H-2A rocket, reaching a temporary transfer orbit less than 30minutesafter launch. The satellite fired its main engine five times over thenext sixdays to reach its prescribed orbital altitude, then controllers allowedthecraft to drift until it reached position over Japan.

Projectedagainst Earth's surface, Michibiki's groundtrack charts an asymmetric figure-eight pattern stretching from JapantoAustralia as it alternates north and south of the equator.

Michibikiwill be near-zenith, or almost straight up, inthe Japanese sky for about eight hours each day. If launched, twofollow-onsatellites would permit continuous coverage of Japan.

Japan'ssatellite navigation program aims to augmentsignals from the U.S. Air Force's Global Positioning System, a networkofspacecraft circling 11,000 miles above Earth. Although there are 30operationalGPSspacecraft,only a small fraction of the fleet is visible from asingle point on Earth at one time.

Anavigation terminal on the ground needs four GPSsatellites to compute the user's position, elevation and local time,butskyscrapers and mountains in Japan often block line-of-sight signalsfromspacecraft low in the sky.

Japanhopes to resolve the issue by launching up to threeof its own satellites strategically positioned high in the sky over thecountry, where their signals will not be impeded by manmade or naturalterrain.