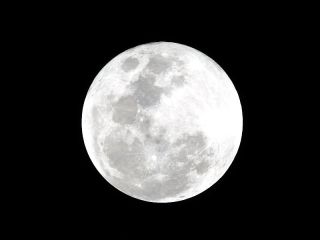 Skywatchers with the moon on their minds can get their lunar fix tonight (Sept. 18) at three NASA space centers as part of a global moon-watching event.

NASA centers in California, Alabama and Maryland will welcome the public tonight as part of the first International Observe the Moon Night, a worldwide project to spur interest in the moon among the public. The space centers are just some of the participants in the skywatching event. Some 370 venues across 30 countries are expected to host moon-watching parties of their own, NASA officials said.

"We're participating in a truly international event to share knowledge and information about the moon," said Kim Newton, a spokeswoman for NASA's Marshall Space Center in Huntsville, Ala., where scientists will be waiting with telescopes to share moon secrets with the public. "We're looking forward to a great turnout."

Hundreds of other local moon-watching events are planned around the world tonight. To see if an event is planned near your location, visit the International Observe the Moon Night project website: http://www.observethemoonnight.org/getInvolved/attend.cfm

Here's a look at the three NASA centers opening their doors for moon-lovers tonight:

The Goddard Space Flight Center Visitor Center in Greenbelt, Md., will hold moon observing events from 6:30-10 p.m. EDT, weather permitting. The events includes guest speakers, hands-on activities and ? for early attendees ? a tour of the center's laser-ranging facility. Tours of the laser-ranging facility, used to help determine the position of the moon and NASA's Lunar Reconnaissance Orbiter currently in orbit around it, are open to the first 100 visitors.

Goddard officials will show photos of the moon taken by the LRO spacecraft, encourage moon observations and discuss the moon's phases, history and appearance.  For more information on the Goddard events and schedule, visit: http://www.nasa.gov/centers/goddard/visitor/events/observe-the-moon.html

NASA's Marshall Space Flight Center is teaming up with the Lunar Quest Program to host a moon-watching event at the U.S. Space & Rocket Center in Huntsville, Ala., from 5-8 p.m. CDT, weather permitting.

Several large amateur telescopes will be available for the public to view the moon, along with an inflatable planetarium and an "astronomy van" that will offer 3-D views of the moon as it would appear through the windows of a spacecraft command module, Marshall center officials said.

Astronomer Rob Suggs, NASA Space Environments Team lead and manager of the Lunar Impact Monitoring Project at Marshall, will be present to discuss the latest moon discoveries with the public. For more information on the Marshall events and schedule, visit: http://www.nasa.gov/centers/marshall/news/news/releases/2010/M10-120.html

At NASA's Ames Research Center in Moffett Field, Calif., event organizers plan to aim more than 40 telescopes at the moon for visiting skywatchers. The event will run from 7-11 p.m. PDT, weather permitting.

NASA scientists will be available to discuss recent lunar discoveries, including the existence of water on the moon, the upcoming Lunar Atmosphere and Dust Environment Explorer mission and other moon-watching projects.