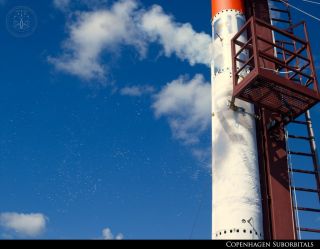 The HEAT-1X during its launch attempt on Sept. 5.
(Image: © Copenhagen Suborbitals)

A powerless hair dryer was apparently to blame for thwartingthe debut launch of a privately built Danish rocket, pushing the novelbooster's first flight back to sometime in June 2011.

The maiden launch of the Tycho Brahe space capsule, whichhas room for a human pilot to half-sit, half-stand in it, was to have carried atest dummy almost 19 miles (30 km) into the upper atmosphere on Sunday (Sept.12). The capsule rested atop the Hybrid Exo Atmospheric Transporter 1X, orHEAT-1X, rocket, from a launch platform floating in the Baltic Sea.

But the suborbitalrocket launch was scrubbed when a liquid oxygen valve in the rocket becamestuck after a hair dryer lost electric power, near the Danish island of Bornholm, the Copenhagen Post newspaperreported after a press conference with the rocketeers.

Rocket creators Peter Madsen and Kristian von Bengtson of thenonprofit Copenhagen Suborbitals did not sound discouraged. "We aim tolaunch ourselves into space," von Bengtson told SPACE.com. "Theentire R&D and production of it is just as exciting as the launch attemptitself."

The engineers, tackling the lofty goal of eventuallylaunching a human, are relying on private funding and donations for theireffort, which is costing just $70,000.

Their firstlaunch try Sunday came after several days of delay.

The rocketeers have already compiled a list of improvementsto work on before next year's attempt, according to a Sept. 7 blog post byMadsen.

In his post, Madsen referred to the faulty valve-heatercomponent as a blow dryer. The Copenhagen Post reported that it was acommercial hair dryer. [10Private Spaceships Becoming Reality]

Madsen's homemade submarine, called the Nautilus, had towedthe floating platform to its designated launch site under an empty sky Sept. 5.The Nautilus' engine supplied power for the hair dryer used in the rocket to keepthe liquid oxygen valve from freezing. But the submarine's engine was shut downfor the launch ? and a short launch delay may have sealed the deal.

It may have been frozen lubricant in the actuator that preventedthe actuator from opening the valve, according to the Danes. Anotherpossibility is that traces of water left from an earlier pressure test frozeinside the valve.

"We had to leave the heating system without power forlonger than planned," von Bengtson said in an e-mail. "Those extraminutes without power were perhaps enough for the LOX valve to freeze up."

There were other possibilities for the failure to launch,but such an investigation would have to wait for the engineers' 21-person team todisassemble the rocket.

Team member Thomas Scherrer has proposed coming up with amore "elegant" heating solution for the valve, the Danes said, buteither way, they plan to ensure next time that power is available leading up tothe actual moment of rocket firing.

How to make it better

Future launch attempts could also benefit from morestability on the rough seas, Madsen said. One improvement would be finding abetter way to secure the rocket in its standing position.

Madsen envisions an upgraded version of the Sputnik launch platformthat would provide its own propulsion.

Adding a third hull beneath the Sputnik platform could freeup the outer two pontoons to mainly act as stabilizers in choppy waters, hesaid.

"The third hull will contain a propulsion machinery,generators and steering gears for a rudder," Madsen explained in his blogpost.

The upgraded Sputnik II would more or less act as acatamaran with a Kubota V3800 engine capable of doing 8 mph (7 knots).

In any case, the Danes can expect far greater attention fornext year's test launch as they attempt to join other space-faring nations bysomeday puttinga person into space.

"I think we have taken Denmark by storm," vonBengtson said. "I hope it is because people are inspired and like what weare doing."