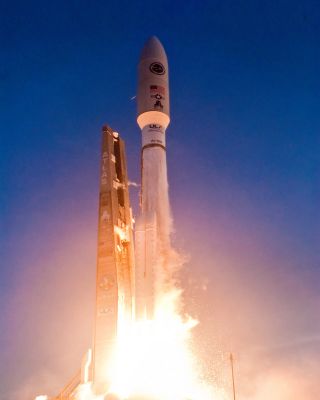 WASHINGTON ? A propulsion system glitch aboard the U.S. AirForce?s first Advanced Extremely High Frequency secure communications satellitehas forced the service to devise a new orbit-raising plan utilizing smallerthrusters that will delay the craft?s arrival at its operating orbit by sixmonths to seven months, according to a service official.

After years of delay, the Air Force on Aug. 14 launched AEHF-1aboard an Atlas 5 rocket, which placed the satellite into an elliptical orbitranging in altitude from 230 kilometers at perigee to 36,000 kilometers atapogee as planned, Madden said during an Aug. 30 media briefing. [Photoof the Atlas 5 rocket launch.]

The deployment mission profile called for the satellite tothen use its hydrazine-fueled liquid apogee engine to climb to an altitude of19,000 kilometers at perigee over a span of 30 days. Then the satellite?selectronic thrusters were to fully circularize the orbit over another 90 days.

Ground controllers initiated the orbit-raising sequence Aug.15, but the hydrazine engine automatically shut down when an anomaly wasdetected, Madden said. Operators tried the maneuver two days later with thesame result, and the engine is now considered a failure, Madden said.

The Air Force Space and Missile Systems Center, AerospaceCorp., and AEHF prime contractor Lockheed Martin Space Systems developed abackup plan to use one of the satellite?s other propulsion systems to get it toits proper orbit, albeit later than planned, Madden said. Thesatellite has another propulsion system that is fueled by the same tank asthe liquid apogee engine but produces only one-twentieth of the thrust.Engineers believe this system can be used to boost the spacecraft to 19,000kilometers at perigee in seven months to eight months, Madden said.

Operators began executing the plan Aug. 29, firing thesmaller thrusters for 40 minutes and raising the satellite?s perigee to 950kilometers. It was essential to raise the satellite as quickly as possiblebecause it was losing about 2.5 kilometers of altitude per day because ofatmospheric drag and the spacecraft had already had to be maneuvered to dodgean oncoming piece of debris, Madden said.

AEHF-1?s revised orbit-raising plan will not consume anymore fuel than the original plan, meaning the satellite is still expected tooperate for 14 years as designed. However, the Air Force could decide it needsto have AEHF-1 in service sooner than now scheduled, and accelerating theorbit-raising sequence would burn more fuel and reduce the satellite?s usefullife, Madden said.

The Air Force has not yet identified the cause of the enginefailure and hopes to do so within a month, Madden said. This is a critical stepbecause the second AEHF satellite is slated for launch in February and it mayrequire new hardware or additional testing, Madden said. If the launch ofAEHF-2 is delayed significantly, finding a new slot on the Air Force?s manifestcould be difficult, Madden said. The service plans to launch the first SpaceBased Infrared System missile warning satellite right after AEHF-2, and NASAhas reserved more than three months on the range starting in August to launchthe Juno mission to Jupiter and the $2.5 billion Mars Science Laboratory.

The Air Force plans to buy four AEHF satellites fromSunnyvale, Calif.-based Lockheed Martin Space Systems at a total cost of $9.9billion. The company may incur some financial penalty as a result of the AEHF-1problem, but Madden said he could not yet provide specifics.