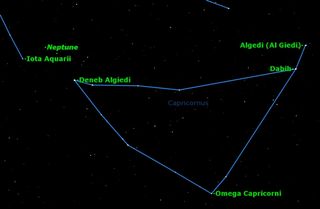 This week Neptune will return to the spot where it was discovered in 1846, in the constellation Capricornus. The planet will complete its first orbit, since being discovered, in 2011.
(Image: © Starry Night Software [Full Story])

Thisstory has been corrected to reflect that Neptune will actually complete itsfirst orbit around the sun, since being discovered, in 2011.

Theplanet Neptune will be in opposition ? when the sun, Earth, and a planet fallin a straight line on Aug. 20. The planet will be exactly opposite the sun inthe sky, being highest in the sky at local midnight. Usually this is also thepoint where the planet is closest to the Earth.

Thisopposition is special because Neptunewill be returning close to the spot where it was discovered in 1846, markingits first complete trip around the sun since its discovery. Neptune is close,but still not quite at the finish line of its first orbit since beingdiscovered yet. That will occur in 2011, according to NASA.

Coincidentally,opposition in 1846 also fell on Aug. 20, although the planet wasn?t actuallyspotted until over a month later, on Sept. 23.

ThisNeptunesky map shows where to find theplanet as it completes it hits opposition this year.

Thediscoveryof Neptune has an interesting prehistory.

Theplanet Uranus was discovered more or less by accident in 1781 by Sir WilliamHerschel, in the course of his search for deep sky objects. As time went by,Uranus? position wasn?t quite what astronomer?s predicted, and mathematicalastronomers began to suspect that there was another planet out there whosegravity was influencing Uranus? motion.

Inthe mid-1840s an Englishman named John Couch Adams and a Frenchman named UrbainLe Verrier independently calculated where this new planet would have to belocated to have the observed effect on Uranus, but both had trouble gettingobservational astronomers interested in looking for it.

Finallythe German astronomer Johann Galle actually looked at the predicted locationand discovered the tiny blue-green disk of the planet that eventually came tobe known as Neptune. The date was Sept. 23, 1846. This led to a drawn outbattle between French and English astronomers as to who pointed to Neptunefirst; in the end, a three-way tie was declared and Adams, Le Verrier, andGalle share the honor of discovering Neptune.

Ironically,Galle was not the first person to observe Neptune. That honor goes to noneother than Galileo Galilei, who twice observed Neptune but mistook it for astar, on Dec. 28, 1612, and Jan. 27,1613. Galileo had two strikes against him: first, the small size and poorquality of his telescopes, and secondly he happened to observe Neptune when itwas stationary, as happens to all planets from time to time because of therelative motions of the planet and Earth.

Fornearly a century Neptune was the planet farthest from the sun, only losing thathonor when tiny Plutowas discovered by Clyde Tombaugh in 1930. Now that the InternationalAstronomical Union has downgraded Pluto?s status, Neptune is once again thefarthest known planet from the sun ? at least in our solar system.

Becauseof its great distance from the sun, 30 astronomical units out (1 AU is thedistance from the sun to Earth), and its relatively small diameter (30,800miles/49,500 km), Neptune is a dim and tiny object in amateur telescopes. WhileUranus can just be glimpsed with the naked eye under perfect dark skyconditions, Neptune requires binoculars or a small telescope to be seen.

Forsomewhat seasoned backyard astronomers, this Neptunemap can help to locate the planet.

Around1 a.m. this week look for the large but faint triangle of Capricornus, to theleft of Sagittarius and the Milky Way. The two stars at the left end of thetriangle point the way to Neptune, just a little bit short of and above thestar Iota in the neighboring constellation Aquarius.

Ina small telescope, Neptune will look just like a star; what gives it away isits distinctive blue-green color.

Althoughtiny in a telescope and dwarfed by giants Jupiter and Saturn, Neptune is stillfour times the diameter of the Earth. Like all the gas giant planets, it showsonly an atmosphere, in this case fairly featureless. When the Voyager 2 passedby in 1989 it photographed a huge "Blue Spot" in Neptune?s upperatmosphere, perhaps similar to the Great Red Spot on Jupiter. Like all the gasgiants, Neptune has a system of rings, but these are far fainter than Saturn?sfamous rings.

AlthoughNeptune?s face appears serene, its atmosphere boasts winds which travel almostat supersonic speeds. Its 13 moons range in size from what are little more thanboulders up to Triton, 1,680 miles (2,700 km.) in diameter.