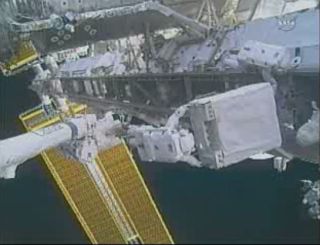 NASA officials said Wednesday that astronauts will now have to perform four spacewalks in all — twice the number originally planned — to repair the International Space Station's ailing cooling system.

Wheelock and Caldwell Dyson spent nearly 7 1/2 hours working to remove the oven-sized pump from the space station's right side. A third repair spacewalk, which was slated for Sunday, has been delayed to Monday morning with the fourth reserved for any remaining work, space station managers said.

Space station program manager Mike Suffredini said that the extra day between Wednesday's spacewalk and the Monday excursion will give the space station crew and Mission Control teams time to rest.

"We've got an enormous workforce that has, in a large part, dropped everything while we work on this," Suffredini said.

Station managers originally hoped to complete the repairs in two spacewalks, but added a third spacewalk after astronauts encountered obstacles during their first repair attempt Saturday. NASA has been working full-tilt to plan, then re-plan, repair spacewalks — known at NASA as extravehicular activities — since the ammonia pump failed July 31.

"This team is good, but there's just so many hours in a spacewalk and there's a lot of work left to be done to get ourselves all buttoned up in the same condition we were before we started these EVAs," Suffredini said.

There is no firm date yet for the fourth spacewalk, but it could occur late next week if space station astronauts do not complete the installation of a new pump on Monday.

If the new pump is successfully installed Monday, the fourth spacewalk would be dedicated to moving the broken pump to its final storage position. During Wednesday's spacewalk, the astronauts parked the disabled pump in a temporary location.

NASA station managers have said the ammonia pump failure is one of the most challenging repairs for the International Space Station ever attempted. The cooling system is so critical to station operations, that a pump repair is one of 14 major failures that NASA engineers have prepared emergency plans for in advance, they added.

There are two main cooling system loops — Loop A and Loop B. The failed pump is in Loop A, while the other cooling loop remains operational. It was delivered to the space station in 2002, but wasn't activated until 2006.

The International Space Station has been under construction by 15 different countries since 1998 and is slated to be completed next year. The $100 billion orbiting laboratory is currently home to six astronauts; three Americans and three Russians.

NASA plans to fly two more shuttle missions (in November and February 2011) before retiring its orbiter fleet for good next year.

The space agency would need approval from Congress and the White House to fly a potential third shuttle mission, which would launch next summer if approved. Last week, the Senate passed a NASA authorization bill that would approve that extra shuttle flight, though the House vote on its version of the bill is still pending.