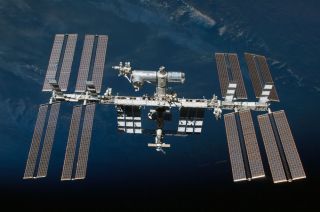 NASA has delayed two spacewalks to fix a major coolingsystem failure on the International Space Station for the second time, pushingthe start of the vital repairs to no earlier than Saturday.

American astronauts Douglas Wheelock and Tracy CaldwellDyson were planning to perform the first spacewalk Friday to replace a failedammonia pump on the station's right side. That spacewalk ? which was alreadydelayed one day ? will now begin Saturday at about 7 a.m. EDT (1100 GMT),with the second spacewalk set for no earlier than next Wednesday, Aug. 11.

"Thank you for the word," Wheelock told MissionControl. "Thanks for the hard work. We know people are still workingthrough the evening, and through the night, and we appreciate it."

The space station's cooling system troubles began July31, when a power spike tripped a circuit breaker that shut down one of two pumpsthat push liquid ammonia through the orbiting laboratory's cooling system. Attemptsto reactivate the stricken pump were unsuccessful.

The failure forced astronauts to turn off many systems onthe space station's U.S. segment and shut down the backup systems for some othersto reduce the amount of heat generated by equipment. ?The space station'sworking pump is currently operating normally to cool the systems left online.

NASA has repeatedly stressed that the space station crewis in no danger from the malfunction.

But mission managers do want to repair the cooling systempump swiftly in order to restore the space station to full operations.Astronauts on Earth have been practicingthe spacewalk repair to help Wheelock and Caldwell Dyson prepare for theirorbital work.

The malfunction is a major system failure and one of 14that NASA has prepared repair plans for on the off chance it ever occurred.There are four spare ammonia pumps currently stored on platforms on thestation's exterior.

The pumps are not small. They are bulky and are expectedto be difficult to maneuver in the weightlessness of space.

Caldwell Dyson has said the pumps are about as large as alaundry dryer.

The InternationalSpace Station is currently home to six people; three Americans and threeRussians.

NASA will broadcast the International SpaceStation spacewalk repairs live from space on NASA TV, with the first spacewalkslated to begin Saturday at 7 a.m. EDT.