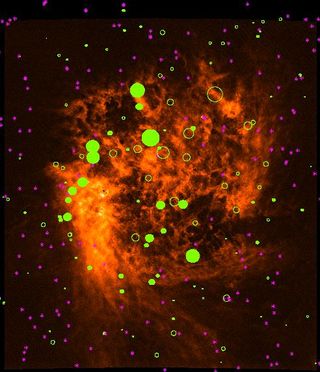 Radio telescope image of the Large Magellanic Cloud, overlaid with symbols indicating the magnetic field's strength and direction at various positions. Filled green circles indicate places where magnetic north is pointing toward us, while the open green circles show locations where it points away. Larger circle show stronger readings. Purple asterisks indicate positions where the magnetic field was too weak to be measured. Background image: S. Kim et al/ATNF

A galaxy that clings to our Milky Way has a strong and ordered magnetic field, even though the field ought to be in disarray since the galaxy itself is being torn apart.

Astronomers think star explosions are blowing the magnetic field into shape, something like inflating a ball. And the process, which has never been supported by clear evidence before, may be at work in all galaxies.

The Large Magellanic Cloud, or LMC, is about 160,000 light-years away. It is considered a satellite to the Milky Way, a much larger collection of stars that is gravitationally ripping the LMC to shreds.

The Milky Way has a smooth magnetic field that scientists have assumed was created over billions of years by the relatively undisturbed rotation of the galaxy and a fairly smooth distribution of stellar birth and death.

By that logic, the LMC -- which is squeezed and squashed periodically and which undergoes disruptive fits of star birth -- ought to have a totally disorganized magnetic field. The LMC never sat still for the billions of years needed to build a stable magnetic field the old-fashioned way.

"If a galaxy experiences sudden bursts of star formation or supernova explosions, the energy that these processes release should completely disrupt the large-scale magnetic field," said Lister Staveley-Smith of the CSIRO Australia Telescope National Facility, where the observations were made. "And we know the LMC has had those kind of violent events over the last several thousand million years."

Yet the LMC's magnetic field is not at all disorganized, based on the most comprehensive map ever made of another galaxy's magnetism.

"Some powerful forces must be at work to keep the magnetic field from being messed up," said Bryan Gaensler of the Harvard-Smithsonian Center for Astrophysics, who led the work.

Gaensler said the best explanation is that the exploding stars fill the LMC with high-energy cosmic rays, which en masse behave like hot gas.

"Just like hot air rises, the cosmic rays are lighter than the rest of the gas in the galaxy," Gaensler explained in a telephone interview. "The cosmic rays tend to float away from the center of the galaxy and drag the magnetic field with them."

Picture the galaxy's magnetic field lines as rubber bands around a ball, Gaensler suggests. Inflating the ball stretches the field and makes it stronger. The LMC's rotating motion then smoothes the field out, the thinking goes. All this, Gaensler said, could occur in just hundreds of millions of years.

The scenario, if proven accurate, would suggest that the theory of how the Milky Way's magnetic field was built might need to be rethought.

"If this is what's going on in the LMC, there's no reason to think it's not happening in all galaxies," Gaensler told SPACE.com.

The work was detailed Friday in the journal Science.