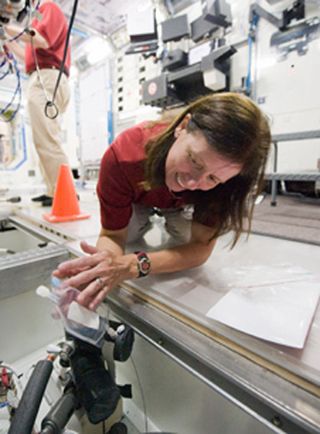 Houston may have been the home to NASA's Mission Control andthe hub of U.S. human spaceflight program for more than 40 years, but the Texasmetropolis has never produced a hometown astronaut. That is, until now.

On Tuesday, June 15 at 4:35 p.m. local time in Houston,flight controllers at the Johnson Space Center in Texas will watch as astronaut Shannon Walker becomes the first Houston native to launch into space.

Walker, 45, is headed to the International Space Stationaboard a Russian Soyuz spacecraft set to launch from the Central Asianspaceport of Baikonur Cosmodrome in Kazakhstan, where the local time will beearly June 16 at launch.

Walker will be joined by fellow NASA astronaut Doug Wheelockand Russian cosmonaut Fyodor Yurchikhin on the planned Soyuz TMA-19 flight.They are scheduled to spend six months aboard the orbitingspace station once they arrive on Thursday to join three other Expedition24 crewmembers already livingon the station.

"It was a stroke of luck how it happened," saidWalker.

Walker also pursued her doctoral degree in space physics,and returned to NASA in 1993. She has worked in both Russia and the UnitedStates throughout the construction of the International Space Station. In 2004,Walker applied and was accepted into NASA'sastronaut corps.

"When I became an astronaut, I knew I wanted to pursuelong-duration flight aboard the station," she said. "I knew it wouldbe just a tremendous personal challenge, and I looked forward to it."

Flying on space stations is also a family affair for Walker.She is married to NASA astronaut Andrew Thomas, a veteran of three spaceshuttle flights ? including a 2005 trip to the International Space Station ?and one long-duration stay on Russia's Mirspace station.

Walker traveled around the world to train for herlong-duration spaceflight, which included in-depth studies in Houston and StarCity, Russia, as well as at space centers in Europe, Japan and Canada.

Despite being so far away from her hometown, Houston isnever far from Walker's mind. Not even in space.

Walker is taking a special memento with her to the cosmicoutpost.?

"They've given me the key to the city to take withme," Walker said.

She also plans on taking with her other personal items, suchas Rice University artifacts, on the mission. And, perhaps equally asimportant, she'll take along the wise words from previous station residents.

"They have all told me to take some time ? as busy asit gets ? to really enjoy the experience and to take it all in," Walkersaid. "I think that's probably the best advice I've gotten."