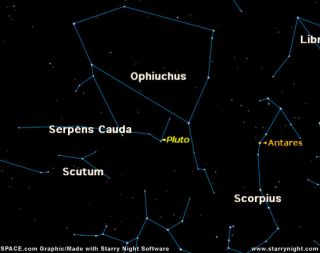 Pluto's location as of 3 a.m. on March 11 from mid-northern latitudes.

Pluto is a difficult planet to find, but with a good-sized backyard telescope, it is possible. The challenge highlights the difficulty professional astronomers faced many decades ago when trying to find the elusive world in the first place.

This year marks the 75th anniversary of the discovery of Pluto. Clyde Tombaugh
discovered the ninth planet in the solar system on the afternoon of Feb. 18, 1930 while he meticulously examined a pair of photographic plates he had exposed in January at Lowell Observatory. The official announcement was made on March 13.

Tombaugh exposed the photographs on the nights of Jan. 23 and 29 using the Observatory's 13-inch Abbott Lawrence Lowell Telescope. Then, as part of the carefully planned and executed planet search, Tombaugh "blinked" the two exposures using a machine called a comparator, looking for motion of objects captured on film.

"One need only visit Lowell Observatory and view copies of the discovery images through the same eyepiece used by Clyde Tombaugh to appreciate what a remarkable discovery this was," notes Lowell's Director, Bob Millis. "The images are extremely faint and testify to the skill, concentration, and dedication that Clyde Tombaugh brought to his work."

This most renegade of all the planets has been an odd, mysterious world ever since. It will remain so for at least another decade, until the yet to be launched New Horizons Pluto-Kuiper Belt Mission arrives at Pluto, the last planet in our solar system to be visited by a spacecraft.

New Horizons is scheduled to launch in January 2006, and is due to swing past Jupiter for a gravity boost and scientific studies in February 2007, before finally reaching Pluto and its moon, Charon, in July 2015.

There is little comfort in knowing, however, that close-up images of Pluto might already have been in hand, had one of NASA's original "Grand Tours" of the outer planets had been carried out back in the 1970s. Nevertheless, astronomers have been inexorably closing in on the secrets of what to most of us is still little more than a star like speck in the sky - piecing together hints gathered from the other remote worlds by the Voyager probes.

Pluto is being observed by growing numbers of nonprofessional astronomers as well.

Up until about 25 or 30 years ago, any amateur who had the equipment to spot this speck against the starry background enjoyed a sort of special status among their peers. But today, thanks to the "Dobsonian revolution" - those large aperture telescopes that first appeared on the market back in the early 1980s - Pluto is being glimpsed by increasing numbers of people.

We are actually quite fortunate to be living around the time when Pluto is near the perihelion point in its orbit, or the point closest to the Sun. For Pluto, this occurs once every 2? centuries. It reached this point back in September 1989, but the planet's current brightness of magnitude 14.0 is still significantly above average, and it's destined to rise slightly to 13.8 when it arrives at opposition to the Sun on June 14. On this astronomers' scale, higher numbers represent dimmer objects, with magnitude 6.5 being about the dimmest visible to the naked eye under perfect conditions.

This is very nearly as bright as Pluto ever gets. Those who have access to at least an eight-inch or (preferably) larger telescope with high magnification and are blessed with dark, transparent skies and steady seeing have a chance of catching a glimpse of it.

Currently, Pluto is located within the constellation of Serpens Cauda. The map near the top-right of this page serves as a guide to those who choose to join the hunt.

What really makes Pluto most renegade is its eccentric orbit.

From 1979 to 1999, this path brought Pluto even closer to the Sun than Neptune. Pluto's orbit is also tilted more than 17? to the plane of Earth's orbit. The two-dimensional orbit diagrams usually published in most astronomy books give a false impression that Pluto intersects Neptune's orbit. But Pluto is presently well "above" Neptune's orbit, and the paths of these two planets don't really intersect at all.

What we usually see are curtate orbits - true orbits that are projected onto the plane of the solar system. The orbital inclinations of the other eight planets are small enough to show little distortion between the actual orbits and the curate versions. Not so, however, with Pluto.

To get a really good three-dimensional conception of Pluto's orbit, as well as of the other planets and comets and asteroids, I highly recommend obtaining a sophisticated computer program like Starry Night Pro [a product of SPACE.com's parent company, Imaginova] that will not only shows such information graphically, but allows you to view motion and changing perspective.

Clyde Tombaugh, the person who first spied Pluto on photographic plates urged the director of the observatory, V.M. Slipher to suggest a name before someone else did. Soon suggestions indeed poured in from all quarters: Cronus, Odin, Persephone, Erebos, Atlas, Prometheus . . . the list seemed endless. One young couple even wrote to Tombaugh asking that the planet be named after their newborn child!

But it was an 11-year old English girl by the name of Venetia Burney who first suggested Pluto to her grandfather, who was a professor of astronomy at Oxford. The name of Pluto was highly favored by Slipher who made the official announcement on May 1, 1930 giving full credit to little Venetia. In addition, Slipher suggested interlocking the letters P and L as the official symbol for Pluto. Not only do they stand for the first two letters of the planet, but they're also the initials of Percival Lowell.

Several Lowell Observatory astronomers continue to study Pluto, particularly Marc Buie and Will Grundy who have studied the cold, dark outer regions of the solar system - with a
special interest in Pluto - since the early 1980s. Their observations include a long-term project to monitor Pluto's brightness changes on a decade, or longer, time scales. Another project is aimed at producing a new generation of Pluto maps based on images taken with the Hubble Space Telescope.

Pluto is currently located at a distance of roughly 2.87 billion miles from both the Earth and the Sun. It appears to be rotating on its axis once every 6.39 days and has a mass estimated to be just 0.0022 that of the Earth. In 1988, an extremely thin atmosphere was detected around Pluto. We know that its surface pressure is about 100,000 times smaller than that on Earth but still large enough for us to expect weather, winds, haze, chemistry, and an ionosphere.

Finally, a rather interesting astronomical issue has surfaced in recent years as to whether Pluto should legitimately be included in the roster of nine major planets. It's decidedly small size (1,413 miles, or 2,274 kilometers across) makes it considerably smaller than any other planet, even smaller than several planetary satellites (including our own Moon). In addition, it has a moon (Charon) that is more than half its size (728 miles, or 1,172 kilometers), as well as a most unplanetary, asteroid like orbit. For some time people have suggested that Pluto is really an escaped satellite of Neptune, one that closely resembles its largest satellite, Triton.

Other's have proposed that Pluto should not be considered a planet, but rather as the "King of the Kuiper Belt Objects."

The Kuiper Belt is a ring of icy objects strung like a dirty diamond necklace in the vastness of space beyond Neptune. Kuiper Belt Objects are very faint, and extremely hard to study from the Earth. Most of the detected "KBOs" are small, with diameters typically around 62 miles (100 kilometers). The first KBOs were discovered only in 1992, but already the Kuiper Belt is changing the way we think about the outer solar system and the formation of the outer planets and comets. Pluto might be the largest of these strange bodies: some sort of condensed clumping of icy cometary nuclei.

In fact, after visiting this "neither fish nor fowl" planet, the New Horizons Pluto-Kuiper Belt spacecraft is scheduled to head deep into the Kuiper Belt to spend several years studying one or more of the icy mini-worlds in that vast region. All this begins happening a decade from now. Until then, Pluto remains an enigma.