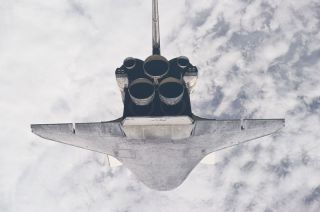 Backdropped by a blanket of clouds, the space shuttle Atlantis is featured in this image photographed by an Expedition 23 crew member as the shuttle approaches the International Space Station during STS-132 rendezvous and docking operations on May 16, 2010.
(Image: © NASA)

CAPE CANAVERAL, Fla. - The space shuttle Atlantis has firedits engines to begin its approach for a Florida landing today to wrap up itsfinal voyage into orbit as NASA's shuttle era draws one mission closer towardits end.

The shuttle fired its rocket engines to leave orbit at about7:41 a.m. EDT (1141 GMT) to begin the long glide back to Earth. Landing for Atlantisis set for 8:48 a.m. EDT (1248 GMT) with commander Kenneth Ham at the controls.

"It's a great day in space and we're hoping it?s a greatday in Florida," Ham radioed Mission Control early Wednesday. "Pleasekeep the skies clear?because we look forward to coming home."

Atlantis will approach Florida from the southwest, flyingover the Pacific Ocean, parts of Central America and the Caribbean before beginningits final approach to Runway 33 in Florida. The winged shuttle is effectively a100-ton glider when it flies in Earth's atmosphere.

The six astronauts are flying on what NASA expects to beAtlantis' final journey into space. The shuttle is due toretire this year, along with its sister shuttles Endeavour and Discovery.

Once Atlantis lands, only two more shuttle flights willremain before the fleet retires for good.

Atlantis actually had two chances to return to Earth today.If foul weather prevented the first attempt, the shuttle could have takenanother trip around Earth and aim for a second opportunity at 10:22 a.m. EDT(1422 GMT).

NASA did not call up a backup landing site at Edwards AirForce Base for today's Earth return of Atlantis. The space agency prefers toland its shuttles at their home port in Florida because it saves on time andthe cost of ferrying the orbiters home from across the country using a modifiedBoeing 747 jumbo jet.

Atlantislaunched May 14 and is capping off a 12-day STS-132 mission to theInternational Space Station, where its crew installed the new Russian roomRassvet (which means "Dawn" in Russian) and a collection of sparehardware, including a new space-to-ground antenna and a six-pack of solar wingbatteries.

"The mission is going really well," Reisman toldreporters Tuesday. 'We've accomplished all of our primary objectives."

For Reisman, Good and Bowen ? the crew's three spacewalkers? the highlight of the trip was the mission's three excursions outside of thestation where they worked to install the new parts.

"The views were just amazing," Good said."We're having a great time up here."

Though he predicted the highlight of the trip for at leastone crewmember would come during landing.

"Maybe for the commander, his best moment is about tocome ? or at least I hope it is ? when he puts this thing down on the groundand calls wheels stop," Good said.

Atlantis is flying its 32nd mission to space since it joinedthe shuttle fleet in October 1985. NASA's shuttles have been flying into spacesince 1981.

"The odometer currently reads about 120 millionmiles," Bowen said of the well-traveled orbiter.

While this is the last scheduled flight for Atlantis, thereis a chance the shuttle could fly again. The orbiter is slated as the emergencyrescue vehicle for the final planned shuttle flight, the STS-134 mission ofEndeavour. If something goes awry during that trip, Atlantis could be launchedto rescue the crew.

As soon as Atlantis is back on the ground, crews will get towork refurbishing the vehicle to ready it for that potential rescue launch.

NASA and some lawmakers have been lobbying to turn thatrescue mission into a full-fledged extra shuttle flight, one which coulddeliver more spares and supplies to the space station in June 2011. But theWhite House has not yet approved adding the extra shuttle flight to NASA'scurrent mission roster.

Atlantis' current mission, STS-132, is NASA's 132nd orbiterflight and the third of five shuttle missions planned for this year.

The shuttles Discovery and Endeavour are next in line to flytheir final flights. Those missions are slated for September and late November.