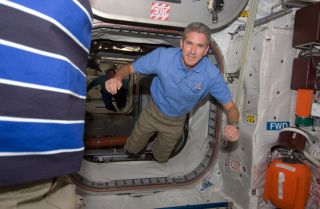 Astronauts on the space shuttle Atlantis packed up theirspacecraft Saturday to get ready for their trip home and will get somewell-deserved time off after a busy week of space station construction.

The six-man Atlantiscrew has spent the last week at the International Space Station, where they addeda new Russian room packed with supplies, fresh solar array batteries and a sparecommunications antenna.

They wrapped up their third and lastspacewalk on Friday. So Mission Control planned to give the spaceflyers a few hoursoff today to rest up.

"I think we won't need to encourage them to rest upand it's about time," station flight director Emily Nelson said. Atlantisis due to undock from the space station Sunday and land in Florida on Wednesdaymorning.

The Rassvetmodule is packed with a ton of U.S. supplies, but the station's ownsix-person crew won't be unload it until some metal shavings floating aroundinside are swept up by its air filters. Until the air is clear, the door to thestation's new room will stay closed.

NASA station managers said it's not uncommon for newmodules to have debris, and even metal shavings from its manufacture, floatinginside. The Rassvet module's fans and air filters should clean up the interiorjust fine, they added.

Today, Atlantis astronauts used the space station'srobotic arm to pack a huge cargo carrier laden with the old solar arraybatteries their replaced back inside the shuttle's cargo bay. They'll also packup gear inside Atlantis that was used while working at the space station.

"So it?s a busy game of accounting for all of thisequipment, making sure it goes to the right place and then getting the downmass down from space station," Atlantis commander Ken Ham said in a NASAinterview. "Down mass is a growing concern with shuttle going away. Youcan?t bring it down on a Proton and a Soyuz is pretty small, so there?s adesire to get a lot of stuff back."

NASA plans to retire its three space shuttles this year tomake way for technology and vehicle development for more ambitious missions toan asteroid or Mars. Atlantis' mission, STS-132, is expected to be the 32nd andlast flight of Atlantis since it entered service in 1985. The shuttlelaunched on May 14.