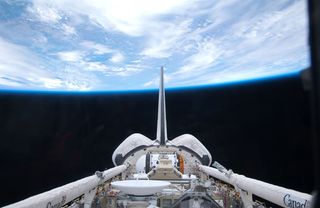 This photograph of space shuttle Atlantis' cargo bay and its vertical stabilizer intersecting Earth's horizon was taken on May 14, 2010 by one of the six STS-132 astronauts on space shuttle Atlantis just after their successful launch. The photo was one of the first non-engineering photos beamed home from the Earth-orbiting spacecraft on its final scheduled mission.
(Image: © NASA)

Reisman will spend much of the spacewalk riding thestation's outstretched robotic arm between a cargo pallet and the top of theorbiting laboratory as it moves like a giant, 57-foot (17-meter) windshieldwiper to retrieve parts of the antenna.

Mission Control expects the views of Reisman on the roboticarm to be spectacular.

"He'll just get a God'seye view of the International Space Station and of Atlantis as he fliesover with these pieces of the communications antenna," shuttle flightdirector Mike Sarafin said Sunday, adding that Reisman's hands should be emptyon return trips to get more antenna parts. "If I were him, I'd grab a fewsnapshots then."

The 6-foot (1.8-meter) wide antenna dish he'll be hauling isbulky and big, and will block his view when he hauls it to its destination onthe Z1 truss atop the station's central Unity module. That means Bowen willhave to guide him in carefully while astronauts Piers Sellers and TracyCaldwell Dyson ? who will be operating the station's robotic arm from insidethe outpost ? take great care to move Reisman into position.

The antenna dish is fragile, too.

"There's a danger of dinging that dish before we have achance to install it," Reisman told SPACE.com before launch.

The astronauts have never rehearsed the delicate work in itsentirety. NASA's spacewalk practice pool isn't big enough to simulate theactual station worksites for the job from start to finish, Reisman has said.The rehearsals had to be broken down into pieces, he added.

The antenna is a vital spare for the station'scommunications system and is responsible for providing backup telephone,e-mail, video and other two-way communication services between the station andits Mission Control centers on Earth.

Atlantis arrived at the space station Sunday after a two-dayorbital chase that began with a Friday launch from Florida. [Atlantisshuttle launch photos.]

Today's spacewalk is the first of three planned for theshuttle's 12-day mission, which is slated to the last flight of Atlantis andalso includes the delivery of a new Russian room for the station.

Reisman and Bowen also have a few other tasks on their platefor today's spacewalk once they complete the antenna installation.

The astronauts plan to install a spare parts storageplatform on the station's Canadian-built Dextre robot and loosen some bolts onthe solar array batteries that will be replaced by Atlantis spacewalkers laterthis week. Today's spacewalk will be the second for Reisman and the fourth forBowen.

They will not, however, try to free a snaggedcable that is blocking a sensor on Atlantis' 100-foot (30-meter) inspectionboom, mission managers said.

The cable is blocking a sensor from panning and tiltingproperly, and prevented the Atlantis crew from completing a full inspection ofthe shuttle's heat shield on Saturday.

Mission managers aren't sure how the snag occurred, butthink it should only take 10 minutes or so for spacewalker to move it clear.That chore, because of time constraints on this mission's extremely fullspacewalks, would be reserved for later excursions on either Wednesday orFriday, mission managers said.

"It will be about as simple as you can possiblyimagine," said LeRoy Cain, head of Atlantis' mission management team."All we want to do is move that cable away from the unit."

A decision on which spacewalk to add that chore to will bemade early this week, Cain added.

Atlantis'mission is the shuttle's final planned spaceflight after 32 missions sinceit entered service in 1985. Only two more shuttle flights are scheduled (onDiscovery and Endeavour, respectively), before NASA retires the orbiter fleetlater this year.

However, Atlantis will not be mothballed immediately sinceit must also be ready to serve as a rescue ship for the final planned shuttlemission on Endeavour, which is slated to launch no earlier than Nov. 27, NASAshuttle officials have said.