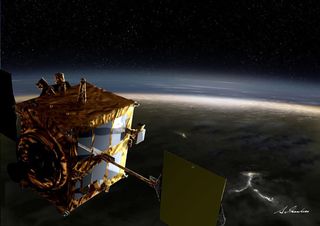 A new Japanese weather probe and daring solar sail conceptare scheduled to blast off together on Monday for a six-month journey to study Venus.

The VenusClimate Orbiter, named Akatsuki, represents the main payload sitting aboardthe H-2A rocket slated for launch at 5:44:14 p.m. EDT (2144:14 GMT) on Monday, May17, though it will be early Tuesday at Japan's Tanegashima Space Centerlaunching site. The launch requires a precisetime window each day in order to achieve a successful trajectory towardVenus.

But Akatsuki, which means "Dawn" in Japanese,won't fly alone. The solar sail, named Ikaros (Interplanetary Kite-craftAccelerated by Radiation Of the Sun), gets to piggyback aboard the rocket asone of five smaller secondary payloads. The four remaining payloads representsmall Earth satellites and experiments built by private universities andcorporations.

Both the 1,100-pound (499 kg) Akatsuki spacecraft and the 700-pound(315 kg) Ikaros should set off for Venus on the same course, if everything goessmoothly. But only Akatsuki has an actual date scheduled with Venus.

The Japan Aerospace Exploration Agency (JAXA) has designedits boxy probe to investigate the origin of sulfuric acid clouds and create a3-D model of high-speed winds in the tempestuous atmosphere of Venus. It alsocarries an instrument that could detect lightning, if any exists within thethick Venusclouds.

Ikaros has a different journey ahead. The solar sail'sdesign should provide the first test ever of solarsail propulsion based on harnessing the pressure of sunlight during anambitious three-year journey to the far side of the sun.

The kite-like solar sail will also test thin film solarcells that generate electricity and might someday help power a hybrid engine ofsorts in space. But Ikaros must rely solely upon the solar pressure withouthaving such an engine on board.

Akatsuki's study of Venus is planned to last at least twoyears after it enters the planet's orbit. It would join a constellation ofother JAXA missions that have visited Earth's moon and an asteroid, as well asone failed mission to Mars. ?

The Japanese space agency also launched a new spacefreighter late last year aboard an H-2B rocket, which represents the newer andbigger descendant of the H-2A rocket that will launch the Venus mission.