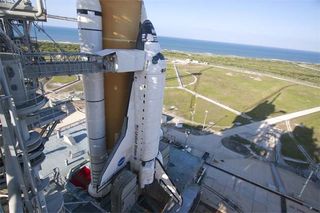 The orbiter ? one of three NASA space shuttles ? will bemaking its 32nd and final scheduled trip to space. Atlantis is slated to blastoff from Pad 39A here at Kennedy Space Center at 2:20 p.m. EDT (1820 GMT),bound for a 12-day trip to the International Space Station.

Weather forecasts predict a 70percent chance of good conditions for launch at NASA?s seaside pad. If theshuttle cannot lift off today, NASA can try again until May 18, when it muststand down to let an unmanned Delta 4 rocket loft a GPS satellite to space.

NASA is planning to retire Atlantisand its sister ships Endeavour and Discovery by the end of the year to make wayfor the next era in space. Just how that era will shape up is still beingdiscussed by NASA and lawmakers.

U.S. President Barack Obama has proposed encouraging privatecompanies to develop a spacecraft capable of launching humans to the spacestation, and freeing up NASA to focus on planning a way to get astronauts to anearby asteroid and then to Mars. This plan would cancel NASA?s existingConstellation program, which would build Orion spacecraft and Ares rockets asreplacements for the shuttles.

Atlantis will also tote up some new hardware for thestation, including a space-to-ground antenna and a set of replacementbatteries. The astronauts plan to complete three spacewalks to install the newmodule and spare parts. [Howbig is the International Space Station?]

Riding with Ham on this mission will be pilot Dominic"Tony" Antonelli and mission specialists Michael Good, GarrettReisman, Piers Sellers and Stephen Bowen.

"The six of us, we seem to get along really well,"Good said in a preflight NASA interview. "It?s a pretty casual, laid back,enjoyable atmosphere to work in. It's just great working with everybody and I?mlooking forward to having a lot of fun with them up there on orbit."

"It kind of brings out the kid in everyone to getthrown into that extreme environment, if you will, and be able to play andsmile and laugh and still get your job done, because we?re professionals,"Ham said. "We're up there to do a job but I think it's pretty neat towatch what happens to people in space."

This is Atlantis' lastscheduled flight, though the orbiter will be processed again in case itmust launch on an emergency rescue trip during the final shuttle mission, theSTS-134 flight of Endeavour in November.

"It?s humbling and you feel honored to be there at thatmoment but at the same time it?s bittersweet, because it?s the end of anera," Reisman said of being on Atlantis' final planned crew.

An especially large crowd of astronauts and NASA crew, manyof whom have flown and worked on Atlantis during previous missions, is expectedto attend this afternoon's launch.