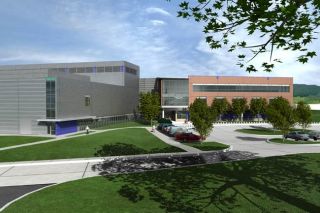 NASA Goddard's new Exploration Sciences Building represents one of the few new research facilities the U.S. space agency has built in the past few decades.

NASA's aging research laboratories have fallen intodisrepair after decades of neglect and are in dire need of a $2.4 billionmakeover if the U.S. space agency hopes to achieve its future goals for scienceand exploration, according to a new report.

In 2009, NASA's deferred maintenance budget for its researchfacilities actually reached a whopping $2.46 billion, according to the reportreleased this week by the National Academy of Sciences.? That's up from a $1.77billion deficit in 2004, the report said.

Some labs are now inferior to similar university-levelfacilities. Many researchers spend much of their time trying to find funds tokeep equipment working, rather than doingactual science, warned the 100-page report titled "Capabilities forthe Future: An Assessment of NASA Laboratories for Basic Research."

"Without adequate resources, laboratories candeteriorate very quickly and will not be easily reconstituted," saidJoseph Reagan, co-chair of the report committee and retired corporate vicepresident of Lockheed Martin.

This seems part of a bigger problem where funding of basicresearch at NASA has fallen off dramatically over the past 5 years or more, thereport found.? The space agency could lose its leadership in aeronauticstechnology even within the U.S., let alone around the world, it added.

That could also threaten long-term goals to buildnew technologies for space exploration, the report stated.

For instance, over 80 percent of the research labs at thoseNASA facilities are more than 40 years old and require more maintenance thanthe available funding permits. The notable exception was a new science buildingat Goddard.

"On average, the committee classifies the facilitiesand equipment observed in the NASA laboratories as marginally adequate, withsome clearly being totally inadequate and others being very adequate," thereport stated.

How NASA stacks up

Another report finding called for NASA to find a betterbalance in funding between short-term missions and longer-term research anddevelopment. The U.S. space agency hopes to address that issue with a renewedfocus on innovation and technology, according to Keegan.

That focus is embodied in the newly established Office ofthe Chief Technologist, led by Robert Braun, and a major initiative in the 2011budget. Braun, NASA'snew tech guru, was an aerospace engineering professor at theGeorgia Institute of Technology and previously mentioned plans to pullin private innovation and commercial partners, which could help make up for theshortfalls in NASA's own research facilities for the short term.

Still, the clock is ticking if NASA hopes to get on theright footing for its recent shift toward ambitious missions aimed at the asteroids,Mars and beyond.

"NASA should find a solution to its deferredmaintenance issues before catastrophic failures occur that will seriouslyimpact missions and research operations," the report suggested.