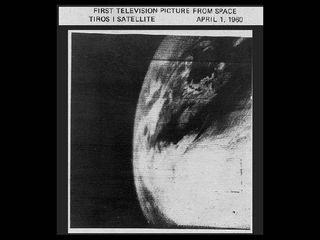 The first photo of Earth from a weather satellite, taken by the TIROS-1 satellite on April 1, 1960. Early photographs provided new information on cloud systems, including spiral formations associated with large storms, immediately proving their value to meteorologists.
(Image: © NASA)

WASHINGTON — NASAcenters across the nation invite journalists and the public to see and hearabout the agency's contributions to exploring and protecting our home planetduring this year's Earth Day celebrations. A highlight of this year'sactivities is a weeklong series of exhibits and talks on the National Mall inWashington.

Begun in 1970, EarthDay is the annual celebration of the environment and a time to assess workstill needed to protect the natural resources of our planet. NASA maintains theworld's largest contingent of dedicated Earth scientists and engineers inleading and assisting other agencies in preserving the planet's environment.

For a comprehensivelisting of NASA's Earth Day activities, visit:

All times are local. NASA center events include:

Saturday, April 17 through Sunday, April 25 (11 a.m.-5p.m. EDT) — NASA is participating in the Earth Day Celebration on the NationalMall organized by the Earth Day Network. The NASA Village, adjacent to theSmithsonian Metro entrance on the Mall, will feature exhibits, presentationsand opportunities to meet NASA Earth scientists throughout the week.

Monday, April 19 (1-8 p.m. PDT) — Reporters and thepublic are invited to a Green Earth Forum at the Ames Exploration Center tolisten to NASA scientists discuss their research and applications projects.

Wednesday, April 28 (10 a.m.-2 p.m. PDT) — Highlightsinclude exhibits and displays from a variety of environmental agencies, publicutilities, conservation groups, and businesses and an opportunity to recyclepersonal electronics.

Sunday, April 18 (10 a.m.-5 p.m. EDT) — Displays at theCleveland Metroparks Zoo will focus on the use of space and aeronauticstechnology for sustainable energy on Earth, including the NASA-led RenewableHydrogen Today project to construct a hydrogen fueling station at the GreatLakes Science Center.

Saturday and Sunday, April 24-25 (9 a.m.-5 p.m. PDT) —JPL will join the Earth Day celebration at the Aquarium of the Pacific in LongBeach, Calif. The event will include exhibits and handouts on NASA's Earthscience research.

Thursday, April 22 (10 a.m.-12:30 p.m. CDT) — Activitieson the theme "reducing our carbon footprint" include a talk aboutenergy by an expert from the Tennessee Valley Authority, a tree-plantingceremony and an environmental vendor exposition.

Tuesday, April 27 (8:30 a.m.-2 p.m. CDT) — Anenvironmental workshop for elementary school teachers, "Helping Our PlanetEarth: It's Up to You and Me," includes classroom activities about animalhabitats, "green" tips, recycling, and other topics.