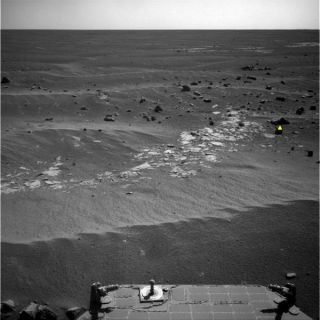 NASA's Mars Exploration Rover Opportunity took this image in preparation for the first autonomous selection of an observation target by a spacecraft on Mars. The more-than-50 rocks in this image, one of which has been selected by the rover for further stu
(Image: © NASA/JPL-Caltech)

NASA's Mars rover Opportunity is getting a chance to callits own science shots on the red planet.

New software uploaded to the intrepid robot now allowsOpportunity to make its own decisions about whether or not to make additionalobservations of Mars rocks it spots when it arrives at a new location.

The rover has already taken its first automated images ofMartian rocks to test out how well the new program works.

"It's a way to get some bonus science," said roverdriver Tara Estlin of NASA's Jet Propulsion Laboratory in Pasadena, Calif.,?also a member of JPL's Artificial Intelligence Group, which developed the newsoftware.

Opportunity, now in its seventhyear on Mars along with its sister Spirit, is currently making goodprogress to its nexttarget, the large crater Endeavor. At that destination, and all along its about7-mile (12-km) journey there, Opportunity will analyze rocks and other featuresof its surroundings to help scientists learn more about the Martian terrain.

The new software system on Opportunity is called AutonomousExploration for Gathering Increased Science, or AEGIS.

With it, Opportunity?s computer can examine images that therover takes with its wide-angle navigation camera after a drive, and recognizerocks that meet specified criteria, such as rounded shape or light color. Itcan then center its narrower-angle panoramic camera on the chosen target andtake multiple images through color filters.

Using the software on Opportunity is a way to take advantageof the rover's longevity to test out advances in robotic autonomy for futuremissions.

Without the software, follow-up observations depend on firsttransmitting the post-drive navigation camera images to Earth for groundoperators to check for targets of interest to examine on a later day. Becauseof time and data-volume constraints, the rover team may opt to drive the roveragain before potential targets are identified or before examining targets thataren?t highest priority.

The first images taken by a Mars rover choosing its owntarget show a rock about the size of a football, tan in color and layered intexture. It appears to be one of the rocks tossed outward onto the surface whenan impact dug a nearby crater.

Opportunity pointed its panoramic camera at this unnamedrock after analyzing a wider-angle photo taken by the rover?s navigation cameraat the end of a drive on March 4. Opportunity decided that this particularrock, out of more than 50 in the navigation camera photo, best met the criteriathat researchers had set for a target of interest: large and dark.

"It found exactly the target we would want it to find,"Estlin said. "This checkout went just as we had planned, thanks to manypeople's work, but it?s still amazing to see Opportunityperforming a new autonomous activity after more than six years on Mars."

Other upgrades to software on Opportunity and its twin,Spirit, since the rovers? first year on Mars have improved other capabilities.These include choosing a route around obstacles and calculating how far toreach out a rover?s arm to touch a Martianrock.

In 2007, both rovers gained the know-how to examine sets ofsky images to determine which ones show clouds or dust devils, and then totransmit only the selected images.

Opportunity is making steady progress towards Endeavor,driving four times last week for a total of 935 feet (285 meters). Spirit, meanwhile,is hunkered down for the Martian winter; its electronics are becoming steadilycolder, though the rover is still awake.