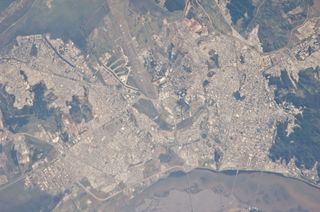 Earthquake damage in Concepcion, Chile is featured in this image photographed by an Expedition 22 crew member on the International Space Station.
(Image: © NASA)

Astronauts living on the International Space Station have taken photographs of Chile in the aftermath of the devastating 8.8-magnitude earthquake that struck the country, revealing a bird's-eye view of the damage wrought by the temblor.

One photograph of Chile from space released by NASA shows the hard-hit cities of Concepción and Hualpen seven hours after the earthquake struck the South American country on Saturday. The epicenter of the quake was about 71 miles (115 km) offshore and the north-northeast of the region.

"While the image is not detailed enough to see damage to individual buildings or roadways, some indicators of earthquake damage are visible," NASA said in a photo description. "A dark smoke plume is visible at lower-left near an oil refinery in Hualpen."

In the lower-right of the photo, parts of a single-lane bridge over the region's Bio-Bio River appear to have collapsed. A small white plume of smoke is also visible near the Universidad de Concepcion.

NASA's Terra satellite also photographed Chile's capital of Santiago less than an hour after the space station's view was taken. That image revealed more smoke and haze that may also be due to the earthquake and its effects, NASA officials said.

The Chile earthquake is the seventh strongest in recorded history. Nearly 800 deaths and widespread damage have been caused by the temblor.

The earthquake was so strong that it should have shortened the length of Earth's days by about 1.26 microseconds and slightly shifted the figure axis of the Earth (which the planet's mass is balanced around), NASA scientists said. One microsecond is one-millionth of a second.

The International Space Station is home to five astronauts from three different countries. The crew includes two Americans from NASA, two Russians and one Japanese astronaut.

On Monday, NASA astronaut Timothy "T.J." Creamer assured followers of his Twitter page that he and his crewmates were able to see Chile from space and were releasing the photographs.

One Twitter follower, who wrote to Creamer as Pablo Martinez from Chile, said the astronauts are lucky they live in space, beyond the reach of earthquakes.

"[I] am glad that you are ok," replied Creamer, who posts updates about his spaceflight as Astro_TJ. "We all feel the intensity of this disaster. Stay safe!"

Earlier today, Japanese astronaut Soichi Noguchi posted a view of Santiago, Chile from space that he took on Tuesday from the station. The photo, posted to Noguchi's Astro_Soichi Twitter page, shows the city below a few clouds on an otherwise clear day.

Much of Chile's coastline sits above the boundary between the Nazca and South American tectonic plates, which are converging. The strongest earthquake recorded in the last 200 years was a 9.5 temblor that struck in May 1960 about 143 miles (230 km) north of the Concepcion region, NASA officials said.