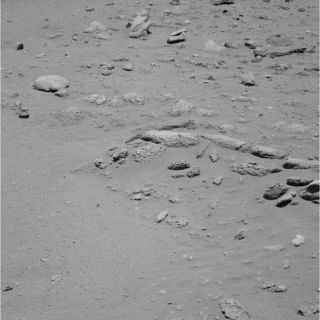 The rock at the center of the frame is "Peace."
(Image: © NASA/JPL/Spirit)

NASA's Spirit rover found a new class of rock on Mars that provides additional clues to the planet's watery past.

The rock, named "Peace," is an exposure of bedrock in the Columbia Hills within the Gusev Crater, where Spirit landed 13 months ago. Though appearing mundane in a black-and-white image, the rock is significant to scientists for what they've learned by digging into it and analyzing it with a suite of instruments.

"This is probably the most interesting and important rock Spirit has examined," said Dr. Steve Squyres of Cornell University, Ithaca, N.Y., principal investigator for the rovers. "This may be what the bones of this mountain are really made of."

The rock provides even more compelling evidence for water playing a major role for altering the rocks in the region, Squyres said.

Peace contains more sulfate salt than any other rock Spirit has examined.

"Usually when we have seen high levels of sulfur in rocks at Gusev, it has been at the very surface," Ralf Gellert, of Max-Planck-Institut fur Chemie, Mainz, Germany. "The unusual thing about this rock is that deep inside; the sulfur is still very high. The sulfur enrichment at the surface is correlated with the amount of magnesium, which points to magnesium sulfate."

Observations by Spirit show the rock contains significant amounts of the minerals olivine, pyroxene and magnetite, all of which are common in some types of volcanic rock. The rock's texture appears to be sand-size grains coated with a material loosely binding the rock together.

Spirit's rock abrasion tool dug into the rock about a half-inch (1 centimeter).

"It looks as if you took volcanic rocks that were ground into little grains, and then formed a layered rock with them cemented together by a substantial quantity of magnesium-sulfate salt," Squyres said. The question is where the salt came from.

"It could come from liquid water with magnesium sulfate salt dissolved in it, percolating through the rock, then evaporating and leaving the salt behind," Squyres said. Or it could come from weathering by dilute sulfuric acid reacting with magnesium-rich minerals that were already in the rock. Either case involves water."

On the other side of Mars, the twin rover Opportunity used its microscopic imager last week to examine a cross section of the heat shield that protected the spacecraft as it slammed into Mars' atmosphere. This is the first time experts have been able to examine a heat shield after it entered another planet's atmosphere.

Engineers expect the findings to aid design for future missions, according to a NASA statement.

"We are examining the images to determine the depth of charring in the heat shield material," said Christine Szalai, a spacecraft engineer at NASA's Jet Propulsion Laboratory (JPL), Pasadena, Calif. "In the initial look, we didn't see any surprises. We will be working for the next few months to analyze the performance of the heat shield."

Since leaving the heat shield, Opportunity has been traveling south.

"The terrain we're crossing is so flat we can see a long way ahead," said JPL rover planner Frank Hartman. "Opportunity has paused for some trenching, but in a few days we'll put the pedal to the metal again."