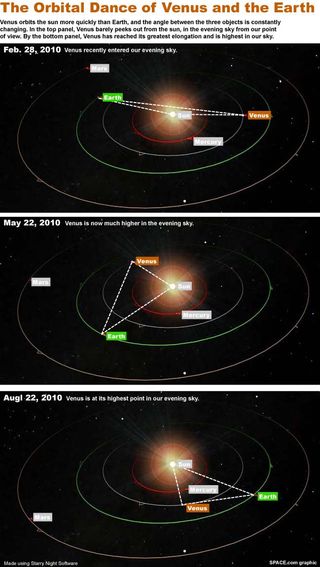 See how the orbits of Earth and Venus cause Venus to rise higher in our sky each evening.
(Image: © SPACE.com/Starry Night Software)

Since last summer, the dominant evening planet was Jupiter,but that has now changed. As Jupiter sank deeper into the bright glow ofevening twilight, Venus emerged.

Venus is closer to the sun than Earth, so its year — thetime it takes to go around the sun — is much shorter than ours. As Venuscircles the sun on the inside track, it alternates from our point of view fromthe morning sky to the evening and back.

After its last stint in the morning sky, Venus appeared togo behind the sun — what astronomers call "superiorconjunction" — on Jan. 11. For weeks it was not visible, mireddeep in the brilliant glare of the sun. Yet with each passing day, it has beenmoving on a slow course to the east, pulling away from the sun from our pointof view.

Now Venus hangs low in the western sky at sunset, an"evening star" that will rise higher each night. Anyone with a clearview of the western horizon can now spot Venus with the naked eye just afterthe sun sets and for about an hour thereafter, but finding it low on thehorizon and amid the sun's fading glare could prove challenging.

By Feb. 28 the difference between sunset and Venus' settingwill have improved slightly to 55 minutes, giving less-experienced sky watchersa fighting chance to get their first glimpse.

Continuing to swing east of the sun during March, Venus willsoon become plainly visible in the western evening sky even to the most casualof observers. Appearing as a brilliant white starlike object of magnitude ?3.9,our sister planet will set at least an hour after the sun by March 4. On thismagnitude scale, smaller numbers represent brighter objects, and Venus is the brightestnatural object in the sky other than the sun and moon.

Venus slowly rises higher each evening to adorn the westernevening sky all during the upcoming spring and summer. By the first week ofJune, it will be setting more than two-and-a-half hours after the sun. Theplanet's greatest altitude at sunset will also be occurring at this time.

Visits with other planets

From March 28 to April 12, Venus and Mercury will make foran attractive pair in the west-northwest sky soon after sunset.? Between thesetwo dates these two planets are within 5 degrees of each other, Venus appearingto the left and slightly above the dimmer Mercury. (Your fist on anoutstretched arm measures about 10 degrees of sky.) On April 3, they willappear closest together, just a little over 3 degrees apart.?

Then in early August, Venus will become part of a"planetary trio," joining much dimmer Mars and Saturn, low in thewestern sky right after sunset.

Venus reaches its greatest elongation — itsgreatest angular distance — 46 degrees to the east of the sun on Aug.22.?

According to the 2010 Celestial Handbook of the RoyalAstronomical Society of Canada, it will be brightest in early autumn as itheads back down toward the sun, reaching its peak brilliance for this apparitionon Sept. 23 at an eye-popping magnitude of ?4.8.? That would make it 23 timesbrighter than Sirius, the brightest star. Venus then quickly fades, vanishingfrom view in mid-October, and passes inferior conjunction on Oct. 28.

Within a week it reemerges as a "morning star" inthe southeast.

Many people don't realized that Venus goes through phases,much like our moon. Between now and October, repeated observation of Venus witha smalltelescope will show the complete range of its phases and disk sizes.?

The planet now appears practically full (99-percent sunlit),and will be a tiny, dazzling disk.?It will become more of a gibbous shape and alittle larger in apparent size by late spring.?In late August, Venus reachesdichotomy (displaying a "half moon" shape).

Then, for the rest of the year it displays an increasinglylarge and thinning crescent as it swings nearer to Earth. Indeed, those usingtelescopes will note that while the Earth-Venus distance is lessening, theapparent size of Venus' disk will grow, doubling from its present size by July31.

When Venus has doubled again in size on Sep. 23, its largecrescent shape should be easily discernable even in steadily held 7-powerbinoculars.