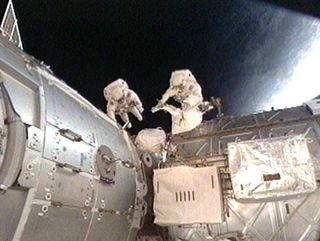 Endeavour shuttle astronauts Nicholas Patrick and Robert Behnken work outside the International Space Station during the second spacewalk of the STS-130 mission on Feb. 13 and 14, 2010.
(Image: © NASA TV.)

Endeavour shuttle astronauts Robert Behnken and Nicholas Patrick hooked up four long hoses to the space station's new Tranquility module in order to supply the room with vital liquid ammonia coolant. The spacewalk, the second in three days for the two astronauts, will allow their crewmates to power up the new space room.

The spacewalkers had to be extra careful of any ammonia leaks while tackling the space plumbing job.

The toxic chemical can pose a health risk to astronauts if it is released inside the space station, and Patrick spotted a tiny leak of ammonia while working with the bulky hoses.

Crystals of frozen ammonia bounced off his spacesuit visor and right glove, but didn't appear to stick to his suit, Patrick said. Behnken described the leak as a brief puff of snowflakes.

"It was about the kind of quantity of stuff that you would expect if you didn't empty the straw at the end of your drink bag," Patrick said.

"If you were drinking ammonia," quipped crewmate Stephen Robinson from inside Endeavour as Patrick laughed.

Later, Mission Control ordered the spacewalkers to conduct a full inspection of Patrick's spacesuit just to be safe.

"You look clean to me," Behnken said.

"Thank you Bob, good news," Patrick replied. The sun's glare was expected to bake off any lingering ammonia flakes on Patrick's spacesuit.

A test of Patrick's spacesuit at the end of the spacewalk found no trace of ammonia, NASA said.

The long hoses installed by the spacewalkers were actually made up of shorter hoses connected together. The original 16-foot (4.8-meter) ammonia hoses for Tranquility failed a preflight pressure test, forcing engineers to build the replacements from spare parts available on Earth.

In addition to the plumbing work, Behnken and Patrick installed insulating blankets to protect the ammonia hoses.

They were also expected to outfit the nearly 24-foot (7-meter) Tranquility module with gear that couldn't be installed before it launched Feb. 8 on the shuttle Endeavour. That included setting up handrails, covering some support struts, and priming an Earth-facing port and vent valve for the station's new observation deck.

"I know you guys cannot see it, but the lights are on in Node 3," shuttle commander George Zamka told the two spacewalkers as they wrapped up their work. "They have cooling and airflow, as well."

"Here is hoping you will let us back in to see it," Patrick replied.

Saturday night's spacewalk ran nearly six hours long, lasting well into early Sunday morning. It was the second of three excursions to fully activate the $382 million Tranquility module and its $27.2 million observation deck — which is lined with seven windows, including the largest space window ever launched.

The new additions are NASA's last major pieces for the $100 billion space station, which has been under construction since 1998. Both were built for NASA by the European Space Agency. With them installed, the orbiting laboratory is 98 percent complete.

While the spacewalkers were outside the station, astronauts inside the orbiting laboratory continued work to move gear into the empty Tranquility module, which NASA originally called Node 3.

"We're hearing your clanking noises from outside," astronaut Kathryn Hire radioed the spacewalkers.

The astronauts were also expected to remove eight restraint bolts from inside the station's observation deck that were blocking efforts to install a critical fabric insulation cover on the outboard end of Tranquility, where the windowed dome is currently located.

The cover must be in place before the dome can be plucked from the end of Tranquility and moved to its final location on an Earth-facing port, where it would offer station astronauts an unparalleled panoramic view of Earth and space.

Endeavour's six-astronaut crew started their day Saturday with some good news from Mission Control. NASA officials opted to give the astronauts an extra day docked at the space station so they would have time to move the outpost's repaired water and urine recycling system into the new Tranquility module.

The recycling system was successfully repaired earlier in the mission using spare parts delivered on Endeavour.

Saturday's spacewalk was the fifth for Behnken and the second for Patrick. They plan to venture outside one more time on Tuesday night to wrap up their orbital work.

Endeavour blasted off on Feb. 8 and is now fly a 14-day mission before returning to Earth on Feb. 21. It is the first of NASA's five shuttle missions planned for this year before the agency retires its three-orbiter fleet in the fall.