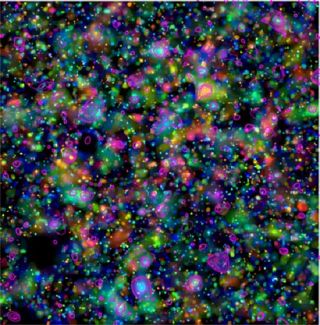 This image shows the galaxy density in the COSMOS field surveyed by the Hubble Space Telescope, with colors representing the distance of the galaxies. The X-ray contours (in pink) show the extended X-ray emission as observed by the XMM-Newton spacecraft.
(Image: © ESA)

To weigh the universe, scientists use two kinds of cosmic scales:one to measure all the regular matter out there, and another to deduce how muchinvisible dark matter remains hidden underneath.

These calculations have been taken further than ever beforeby a new study that tallied both types of mass in smaller and more distantgroups of galaxies than any previous projects. The project found that these farawaygalactic clusters have roughly the same proportion of dark matter to regular matteras the closer galaxy groups do.

The findings could help astronomers understand more aboutdark matter, as well as its even stranger sibling ? dark energy.

Dark matter is a form of stuff that does not interact withlight, so cannot be seen, but makes its presence felt by exerting agravitational pull on normal matter.

Astronomers measure how much darkmatter lies in galaxies by a fluke of physics called gravitational lensing.This phenomenon, predicted by Einstein's theory of general relativity, causeslight to curve as it flies through space-time that has been dented by thegravity of large bodies of mass.

For example, groups of massive galaxies will gravitationallywarp the space-time around them, forcing light to bend as it passes through,and causing them to look distorted when their light reaches our telescopes.Scientists can tell how much total mass there is by how much of this distortionoccurs.

Next, researchers calculate how much normal matter is in a clusterof galaxies by looking at its X-ray light, since the light must be comingfrom only the regular stars and gas that make up the cluster.

Comparing these two calculations ? the total matter to justthe regular matter ? gives a ratio astronomers call the mass-luminosityrelation. So far, the mass-luminosity relation has been measured well fornearby, large galaxy clusters, but there has not been good enough X-ray data toprobe farther or smaller, dimmer clusters of galaxies.

"We can map out the big cities, but no one's been ableto map out the villages yet," said Alexie Leauthaud of the LawrenceBerkeley National Laboratory in Berkeley, Calif., leader of the new study.

Astronomers used observations from the European SpaceAgency?s XMM-Newton satellite and from NASA?s Chandra satellite, as well asdata from the Hubble Space Telescope?s Cosmic Evolution Survey (COSMOS). These ultra-highresolution photos allowed the scientists to extend the mass-luminosity relationfurther than ever before.

With such dim objects, the gravitational lensing wasn'timmediately apparent. So researchers used a statistical analysis to measure theorientation and shape of the galaxies to find small distortions due toso-called weak lensing.

They found that the same general ratio of dark matter tonormal matter prevailed in these distant, small clusters as for nearby, largerclusters.

The finding may help shed light on an even more bizarreaspect of the universe ? darkenergy. Dark energy is the name given to whatever mysterious force iscausing the universe to accelerate as it expands.

Dark energy basically works against gravity in a tug-of-war.While gravity constantly pulls mass inward, encouraging things to clumptogether and condense into smaller space, dark energy does the opposite. Thisforce somehow pulls everything apart, causing everything in the universe tomove away from everything else at ever-increasing speeds.

When mass clumps together enough to form galaxies, it meansthat gravity has won on those scales, helping things to stick together despitethe pull of dark energy. So the more astronomers can measure when and howstructures formed in the universe, the better they can understand just how fardark energy's pull reaches.