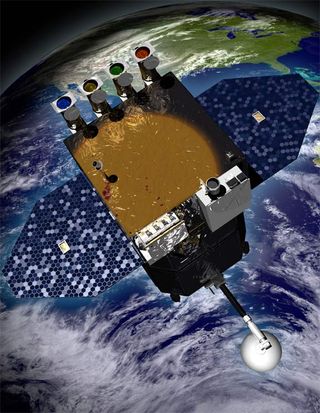 While astronomers gaze at stars farther and farther out inthe heavens, some scientists want to take a closer look at the star closest tous: the sun.

NASA plans to launch a new spacecraft, the SolarDynamics Observatory (SDO), to take the most detailed observations ever ofthe sun to understand its complex weather and storms.

"The sun changes every time we look at it, [it] is neverthe same," said Dean Pesnell, SDO project scientist at NASA's GoddardSpace Flight Center in Greenbelt, Md., in a Thursday briefing.

Scientists hope data from the new probe will help themunderstand changes in the sun's magnetic field, which gets more and less activeon an 11-yearcycle, sending out periodic flares of charged particles that can disrupt technologyon Earth.

For the most part, Earth is protected from these chargedparticles, called the solar wind, by its own magnetic field, which repels them.But during a solar storm, some of that onslaught can get through to the ground,causing disruptions to satellite navigation systems, radio communications,energy grids and other systems.

Data from SDO should help to better predict solarflares to avoid the worst of the damage. This will be particularlyimportant when humans begin to journey back to the moon and on to Mars, wherethere will be no magnetic cocoon to protect them and their spacecraft.?

The observatory contains three instruments that will takephotographs of the sun in eight wavelengths of light every 10 seconds. The datawill be used to study the process that generates the sun's magnetic field,called the solar dynamo.

After it reaches orbit around Earth, SDO will undergo tests,and will likely be able to send back its first scientific data about 60 daysafter launch. The scientists who have been guiding the project since itsinception said they expect that over its five-year mission, SDO willrevolutionize our understanding of solar physics.

"This is my baby, and it's very hard for me to push itout on its own," said Elizabeth Citrin, SDO project manager at Goddard. "Iam proud, I know it's going to perform, I know it's just going to be wonderful."