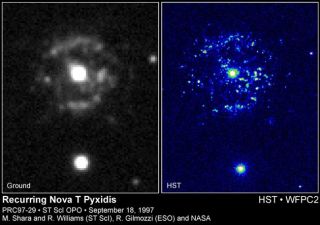 Images from ground telescopes and Hubble show that the white dwarf T Pyxidis is not disrupted by its violent eruptions and soon begins to accumulate more matter from its companion, and repeats the cataclysm some years later.

WASHINGTON — A massive, eruptive white dwarf star in the Milky Way — long overdue for its next periodic eruption — is closer to our solar system than previously thought and could threaten the Earth if it fully explodes millions of years from now.

New observations of the white dwarf and its sun-like stellar companion are giving scientists a better understanding of the star's precarious position as a possible supernova, astronomers said here today at the 215th meeting of the American Astronomical Society.

The two stars are in a close binary system called T Pyxidis, located in the Southern Hemisphere constellation Pyxis ("The Compass Box"). Researchers found that the system is only 3,260 light-years from our solar system — far closer than anyone previously thought. (A light-year is the distance that light travels in one Earth year, or about 6 trillion miles.)

The new findings suggest the white dwarf, considered close to us by cosmic standards, could eventually go supernova. Gamma radiation emitted by the supernova could threaten the Earth with an energy equivalent to 1,000 simultaneous solar flares.

The production of nitrous oxides in Earth's atmosphere by the gamma rays could completely destroy the ozone layer, astronomers said.

Demise, if it comes, won't be anytime soon, however: Scientists' calculations suggest that the star will explode in about 10 million years, said Edward Sion, a member of the research team from Villanova University in Villanova, Pa.

"While we can relax, that is very short on astronomical and geological timescales," Sion told SPACE.com in an e-mail.

The T Pyxidis system is known as a recurrent nova because the massive white dwarf has suffered thermonuclear (nova) explosions about every 20 years, with previous recorded nova explosions occurring in 1890, 1902, 1920, 1944 and 1967. None of these sorts of explosions threaten Earth. But the system is long overdue for its next one. Astronomers don't know why the star's explosiveness has been tamped down of late.

If the mass does continue to build up, the white dwarf could eventually reach the so-called Chandrasekhar Limit and undergo an instantaneous gravitational collapse resulting in a thermonuclear detonation that completely destroys the star. This catastrophic event, known as a Type 1a supernova, releases 10 million times more energy than a nova explosion, or the equivalent of 20 billion, billion, billion megatons of TNT.

Sion and his colleagues analyzed the far ultraviolet spectrum of the T Pyxidis system and put the observation in computer models of white dwarfs to better pin down the star's potential to go supernova.

The observations suggest that the white dwarf is very close to reaching the Chandrasekhar Limit in mass. And observations of the shells of material ejected by the star during its previous smaller nova eruptions also suggest that the star's mass is increasing with time, suggesting that in about 10 million years, it could have accreted enough mass from its partner to go supernova. However, if the star is bigger and taking on mass faster than scientists think, it could explode sooner.