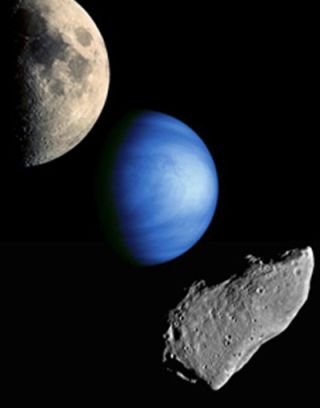 From top to bottom, pictured (not to scale) are the moon, Venus, and an asteroid. These three celestial bodies from our solar system are possible candidates for NASA's next space venture.
(Image: © NASA.)

A weird object that left some observers wondering if it was a piece of space junk is most likely just a small asteroid, and will zoom close by Earth Wednesday, NASA scientists say. It may be visible to seasoned amateur astronomers as it passes harmlessly by the planet.

Astronomers announced the discovery of the asteroid, which they named 2010 AL30, on Monday. It is relatively small, about 36 feet (11 meters) wide, NASA researchers said.

There was some early speculation that the object was a part of a derelict spacecraft, but NASA scientists have concluded that it is most likely a simple space rock flying near Earth.

"I looked at this object closely yesterday morning and concluded that this object is probably not artificial," said Paul Chodas, a scientist at NASA's Near-Earth Object Office at the Jet Propulsion Laboratory in Pasadena, Calif.

What makes 2010 AL30 weird is its orbit, which is almost exactly one Earth year long, leading to some discussion that it might be a man-made spacecraft launched in the recent past.

But Chodas said the asteroid's trajectory is not the kind used to transfer spacecraft out of Earth's orbit, nor is the space rock followed by other objects that escaped from Earth or lunar space. The asteroid was also far from Earth during the Apollo lunar missions of the late 1960s and 1970s, when many spacecraft were launched into the space near the moon, Chodas said.

Professional astronomers have already snapped photos of the object and seasoned skywatchers may be able to do the same if they know where to look.

According to Spaceweather.com, 2010 AL30 will appear as bright as a 14th magnitude star and pass through the constellations Orion, Taurus and Pisces as it passes the Earth. Magnitude is a standard used by astronomers to measure the brightness of objects in the sky. The lower the number, the brighter the object, with the brightest stars in the sky categorized as either a zero or first magnitude.

2010 AL30 is not the only space rock passing relatively close by Earth this week. Another recently discovered object, known as 2010 AG30, will zip by the planet on Thursday. But that asteroid is a bit smaller, 43 feet (13 meters) wide, and will pass by at a comfortable distance of about 650,000 miles (1 million km) from Earth, NASA scientists said.