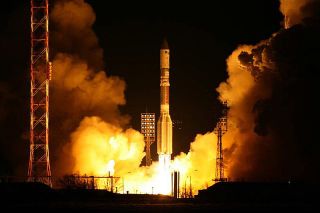 A new high-definitiontelevision broadcasting satellite was deployed by a Proton rocket earlyTuesday, bolstering DirecTV's programming lineup for customers in the United States.

The DirecTV 12 satellitewas bolted atop the 191-foot-tall booster for liftoff at 0022 GMT Tuesday (7:22p.m. EST Monday) from pad 39 at the Baikonur Cosmodrome in Kazakhstan.

The communications payloadweighed about 13,000 pounds at launch, filling nearly all of the Protonrocket's lift capacity. ILS and Russian rocket-builder Khrunichev haveimplemented several recent upgrades to the Proton to give the booster the powerto launch such large satellites, according to McKenna.

"DirecTV placed theirtrust and confidence in ILS two years ago with a very significant launch withthe DirecTV 10 satellite. At that time, it was the largest satellite launchedby Proton, demonstrating the increased capabilities of the vehicle," saidFrank McKenna, ILS president. "Now, with DirecTV 12, DIRECTV once againentrusted their business to us with the continuation of this successfulpartnership. We are very proud to play a significant role in the expansion ofdigital television services in the United States with DirecTV."

From its station in geosynchronousorbit at 102.8 degrees west longitude, DirecTV 12 will reach subscribers in thecontinental United States, Alaska and Hawaii. The satellite is designed tooperate for 15 years.

The satellite will completeDirecTV's phased expansion of high-definition television service to U.S. households. DirecTV 12 was built by the satellite-manufacturing division of Boeing Co.in El Segundo, Calif.

DirecTV 12 will allow thedirect-to-home broadcasting firm to expand its HD capacity by 50 percent,according to Boeing.

The satellite will join twoidentical spacecraft launched in 2007 and 2008. The trio of satellites wereordered to bolster DirecTV's HDTV offering and continue the company's legacy ofuninterrupted service.

"DirecTV 12 isimportant to us because it's the last of our three original Ka-bandsatellites," said Jim Butterworth, vice president of communicationssystems at DirecTV. "It augments our local channel capability, so we cango to more markets with HD programming. And it also is going to give us thecapability to have more movie choices and other services for ourcustomers."

After DirecTV 12 entersservice next year, the company will provide 200 national HD channels and 1,500local HD channels to customers.

"DirecTV 12 is the21st in the Boeing 702 line and will provide significant expansion to thealready unprecedented HDTV service that DirecTV provides to itscustomers," Schmidt said.

"We will launch twointermediate satellites on the Proton system to (geosynchronous) transferorbit, and that will create a significant offering in that segment of themarket, in which we have not participated previously, at very affordable pricesand reliability," McKenna said.

The launch provider ispartnering with Khrunichev and Orbital Sciences Corp., a leading builder ofsmall communications satellites. The Proton Duo service aims to shave 20percent from the cost of delivering each kilogram of payload to orbit, accordingto ILS.