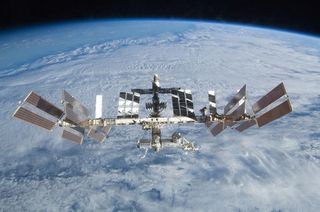 The current configuration of the International Space Station as of Sept. 2009 at the end of NASA's STS-128 mission to deliver supplies and new gear.
(Image: © NASA)

The space shuttle Atlantis and theInternational Space Station are separately flying around the Earth untilFriday, and they can be seen as a pair of bright lights in the sky at certaintimes over the next few days.

Weather permitting, the orbiting objectsshould be visible to the naked eye throughout the United States and Canada,according to SpaceWeather.com. It's a special opportunity to see the twolargest man-made objects in the sky at once.

Several sites can tell you when the two spacecraft arevisible from your location between now and landing day:

Seeing a satellite from Earth isn't that rare: The myriadcommunications satellites flying around Earth regularly appear at night asstars that look to be transiting across the heavens. But the shuttle andstation are both larger than any other vehicle in orbit, and should appear muchbrighter than the average satellite.

On a good night, the station approaches magnitude -5 inbrightness, which rivals the planet Venus and is more than 25times brighter than Sirius, the brightest star in the night sky.