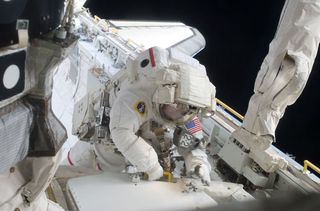 Astronaut Randy Bresnik may be expecting his wife Rebecca togive birth, but that hasn?t shaken his focus for a planned spacewalk outsidethe International Space Station today to install new video antennas and otherequipment.

Bresnik and crewmate Mike Foreman plan to venture outsidethe station at 9:38 a.m. EST (1438 GMT) this morning and spend 6 hours upgrading the spacestation?s systems. A massive cargo carrier laden with tons of spare parts willalso be moved to the station from the linked shuttle Atlantis later today.

Bresnik?s daughter was expectedto be born as early as Friday, but could come today or later, Smith said.Mission managers will work with Bresnik?s flight surgeon to come up with a planto notify the astronaut if his daughter is born during the spacewalk. Bresnikis only the second American to be in space while his wifeis giving birth.

The uncertainty of the baby girl?s arrival has not affectedpreparations for today?s spacewalk, but more late-night false alarms on thestation Friday ? which erroneously indicated a potentially dangerousdepressurization event for the second night in a row ? have forced MissionControl to make some changes.

?There?s going to be a 30-minute time hit and we are makingadjustment for that,? said space station flight director Jerry Jason in anearly morning update. The spacewalk was initially slated to begin at about 8:18a.m. EST (1318 GMT).

The alarmssounded at about 10 p.m. EST (0300 Sat. GMT) while all 12 astronauts on thelinked station and shuttle Atlantis were sleeping. Bresnik and Foreman werecamping out in the station?s Quest airlock, a process that allows them to sleepat a lower pressure than the station to purge their bodies of nitrogen in orderto prevent developing the bends while working outside in their low-pressureNASA spacesuits.

Because of the alarms, the station automatically interruptedthat pre-spacewalk campout and equalized the pressure between the airlock andspace station. Ventilation fans shut off too, kicking up dust that set off asmoke alarm in the airlock, but all the astronauts were safe at all times.

The time required to reset the station?s systems meantBresnik and Foreman had to stop their campout. They will now have to spend timeearly Saturday exercising while wearing oxygen facemasks to purge their bodiesof nitrogen ahead of the spacewalk. The exercise technique is a tried-and-truemethod for spacewalk preparation.

NASA engineers believe the false alarms, which also soundedlate Thursday, are related to a new Russian module called Poisk, which arrivedat the station earlier this month and serves as a research area, docking portand airlock.

Saturday?s spacewalk will be the fifth orbital excursion forForeman and the first for Bresnik.

The crew woke up today at 3:58 a.m. EST (0858 GMT), half anhour later than originally planned, to the song, ?Voyage to Atlantis? by TheIsley Brothers, which was played specially for mission specialist BobbySatcher.

Atlantis astronauts are in the midst of an 11-daymission to deliver tons of huge spare parts to the space station ? pieces sobig, only NASA?s shuttles can carry them. NASA wants to ship as many extraparts and gear to the station as possible before the planned 2010 retirement ofits three remaining space shuttles.

Earlier this week, shuttle astronauts attached another massiveshelf-like carrier - laden with spare pumps, tanks, a gyroscope and other gear? to the station. The shuttle is due to undock from the station next week, justbefore Thanksgiving, and land on Friday.