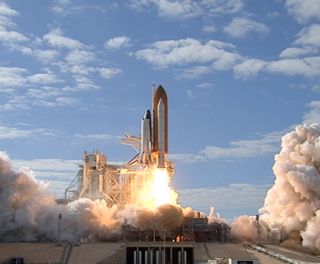 Space shuttle Atlantis with it crew of six astronauts lifts off from Launch Pad 39A at NASA's Kennedy Space Center in Florida on Nov. 16, 2009.
(Image: © NASA TV)

WASHINGTON ? NASA hailed the flawless liftoff of spaceshuttle Atlantis Monday, a space shot that marked the agency?s fifth shuttle launchof the year ? a flight rate not seen since 2002, before the tragic Columbiaaccident.

"This is a tremendous time in spaceflight," saidBill Gerstenmaier, NASA's associate administrator for Space Operations. "Thislast year we've had a very successful year."

Atlantis blastedoff at 2:28 p.m. EST (1928 GMT) from Kennedy Space Center in CapeCanaveral, Fla., carrying sixastronauts and a slew of large spare supplies to the International SpaceStation.

"The hardware was good to us; Atlantis is a goodmachine," launch director Mike Leinbach said after the liftoff. Leinbachcredited the dedicated crew who worked on the reusable vehicle to turn itaround quickly after its May trip to the Hubble Space Telescope.

"It's just the love of the people doing the work,"he said. "We could not do all this work if we didn?t enjoy it."

Since 2005, when NASA resumed shuttle missions following theloss of Columbia and its seven-astronaut crew in 2003, the agency has steadilyincreased its flight rate while taking care not to shirk safety concerns.

In 2005, NASA launched one shuttle mission. Last year, theagency launched four flights. The record for most shuttle flights in a singleyear is nine, a benchmark NASA hit in 1985 before instituting new shuttlesafety inspection and repair methods.

The breakneck pace comes right as NASA is preparing towind down its shuttle program, with the three-orbiter fleet due to beretired in about a year. NASA plans to replace the shuttle fleet with newspacecraft and rockets by no earlier than 2015, though that plan is underreview by the White House.

Atlantis' STS-129 mission currently underway comes on theheels of the first test launch of one of those new rockets, the Ares I, which liftedoff on a suborbital flight last month.

The STS-129 flight is Atlantis? second-to-last scheduledvoyage. It is NASA?s 129th shuttle flight since the fleet debuted in 1981.

"It's starting to hit home, I have to admit toyou," Leinbach said of the impending end of the shuttle era. After thisflight, there are only five more shuttle missions planned. What comes next forNASA is currently under review by the Obama administration.

Atlantis' trip helps pave the way for the retirement of thespace shuttles by supplyingthe space station with two large carriers filled with spares to have onhand if something breaks. Only shuttles have the cargo-carrying capacity to ferrysuch huge supplies to space. The only other current spacecraft serving thespace station is the Russian Soyuz, which has much less room for cargo.

"There's no way with any other vehicle you could packthese two carriers in a single mission," Gersteinmaier said.