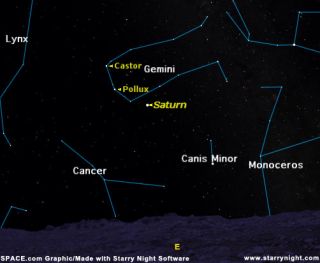 With the bright Moon having departed the evening sky, this is the week to enjoy Saturn. Now located among the stars of Gemini, the ringed planet is readily visible as a yellowish-white "star" in the winter night sky.

A small telescope will also reveal Titan, the moon that's now in the news after a successful mission to land on its strange surface.

On Jan. 14, Saturn arrived at opposition to the Sun, appearing to rise as the Sun sets, reaching its highest point in the southern sky at midnight and setting as the Sun rises.

Now two weeks past opposition, it is readily visible low in the East-northeast as darkness falls and is visible for virtually the entire night. It currently shines at magnitude minus 0.3. On this astronomers' scale, smaller numbers represent brighter objects, and negative numbers are reserved for the brightest of all.

Among the stars, only Sirius and Canopus are brighter than Saturn right now. Nearby Pollux, one of the 21 brightest stars appears only one-quarter as bright as Saturn. Pollux and Castor are known as the Twins of Gemini.

In mythology, Saturn closely resembled the Greek god Cronus, but he's more usually recognized as the Roman god of agriculture. The name is related to both the noun satus (seed corn) and the verb serere (to sow). But why would the planet Saturn be linked to agriculture? Perhaps a clue can be found from the ancient Assyrians who referred to Saturn as lubadsagush, which translated, meant "oldest of the old sheep." Possibly this name was applied because Saturn seems to move so very slowly among the stars; it may have also reminded skywatchers of the slow gait of plowing oxen or cattle.

The ancients also regarded Saturn as the "highest" planet, occupying the outermost or highest sphere before that of the fixed stars.

The first glimpse of Saturn's famous rings were made by Galileo Galilei (1564-1642) who pointed his crude, imperfect "optick tube" toward Saturn, and saw it appearing to have an odd pair of appendages or companion bodies on either side. He announced this discovery in 1610 with an anagram written in Latin.

The jumbled letters could be transposed to read: Altissimum planetam tergeminum observavi ("I have observed the highest planet to be triple."). But later, when the rings turned edgewise to Earth and the two companions disappeared, Galileo invoked an ancient myth when he wrote, "Has Saturn swallowed his children?"

Galileo was completely baffled and lamented that his mind was too weak to comprehend this strange phenomenon. Actually, it was his telescope that was too weak.

It was not until March 1655 that a Dutch mathematician, Christian Huygens (1629-1695) utilized a much better telescope, and saw the rings for what they really were. We know today that they are composed of a myriad of solid particles, ranging in size from microscopic specks of dust to flying mountains. These are likely the icy fragments of a satellite that probably ventured too close to Saturn and was torn apart by tidal forces.

Saturn is the telescopic showpiece of the night sky, thanks to its great rings in all of their icy, glimmering elegance. In small telescopes, they surprise observers with their chilling beauty even when expected. Currently, the rings are dramatically tipped more than 23 degrees to our line of sight.

April 2003 was a rather auspicious month for viewing Saturn, as its ring system was opened to its widest possible angle -- 27 degrees -- to Earth. Astronomers at that time said that the maximum Saturnicentric latitude of Earth was attained. Such extremes generally come at approximately 15-year intervals.

Prior to 2003, the last such occasion in September 1988; the next will be in October 2017. Still broadly displayed to our view now, the rings are gradually tipping away from Earth and by August 2009 they'll be turned edgewise to us and become difficult, if not impossible to see.

After seven years of travel through the Solar System, the Cassini spacecraft reached Saturn last July to begin a 4-year voyage of discovery of the mysteries of the Saturn system. A highlight of the Cassini mission, led by NASA, was the deployment and landing of a small spacecraft built by the European Space Agency - the Huygens Probe - on the surface of Saturn's largest moon, Titan on Jan. 14.

Titan is 3,200 miles (5,150 kilometers) in diameter and, appearing as an eighth magnitude star-like point of light, can be readily viewed in a small telescope. Titan orbits Saturn at 16 day intervals and when it is at greatest eastern and western elongation from the planet, Titan can appear as far as five ring diameters from Saturn.

Other satellites that might be viewed, depending on the size of your telescope, are Rhea, Tethys, Dione and Iapetus. Saturn's other satellites, are much smaller (the smallest, 2003 SI, has an assumed diameter of just 3 miles, or 5 kilometers) and are only visible with very large instruments. Other than Jupiter, Saturn is the planet that has the most moons - at least 31 at last count.