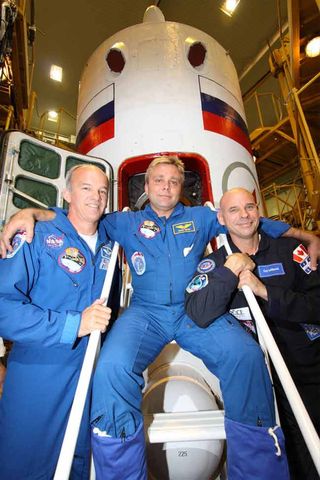 Two new space station crewmembers and Canada's first space tourist are due to launch into space Wednesday on a Russian rocket.

The three spaceflyers are set to blast off on the SoyuzTMA-16 spacecraft from Baikonur Cosmodrome in Kazakhstan at 3:14 a.m. EDT (0714GMT).

Veteran NASA astronaut Jeff Williams and Maxim Suraev, arookie Russian cosmonaut, are scheduled to take up long-term residence on the InternationalSpace Station (ISS) as Expedition 21 crewmembers. Their Soyuz crewmate, billionairespace tourist Guy Laliberte, plans to stay aboard the station for about 10 daysbefore flying home. Laliberte is an acrobat and the founder of Cirque duSoleil, and plans to devote his trip to raising awareness of global waterissues. Clickhere for SPACE.com's full profile of Laliberte.

The three spaceflyers arrived at Baikonur on Sept. 18 andhave been undergoing final training and preparations.

"Everything is progressing smoothly," Williamswrote Monday on his blog (http://blogs.nasa.gov/cm/blog/2089)."Several of us have been running in the desert every day, crossing pathswith camels, cows, goats, wild horses, and the occasional shepherd."

Williams, a native of Winter, Wis., is a former U.S. Armypilot who served for three years in Germany. He has also served as anexperimental test pilot and has participated in competitive sport parachuting.

In addition to his blog, Williams is sharing his experienceas an astronaut by posting updates on the microblogging site Twitter under thename "Astro_Jeff." He is one of a growing groupof spaceflyers communicating with the public through the site.

"Our rocket is on the pad andready to go!" he tweeted Monday.

Williams was selected as a NASA astronaut candidate in 1996.His first trip to space was as a flight engineer and lead spacewalker on theMay 2000 STS-101 journey of the space shuttle Atlantis. He flew again in March2006 aboard a Russian Soyuz spacecraft to spend six months aboard the ISS as anExpedition 13 flight engineer.

For the first half of his upcoming mission, Williams willserve as an Expedition 21 flight engineer. In December, when a new spacecraftarrives with three new crewmembers, Williams will take over as commander ofExpedition 22.

When he's not busy with scientific research and stationmaintenance duties, Williams is a particularly avid Earth photographer.

"The biggest reward to me has always been bringing theexperience to others on the ground," he said in a preflight interview."Part of that, bringing the story back, is the photography."

Williams is married and has two sons.

Suraev, a 37-year old Russian Air Force pilot, is set tomake his first trip to space on this mission. He began cosmonaut training in 1997,and was qualified as a test-cosmonaut in 1999.

"I?m really just looking forward to be in zero gravityand see how it might affect me," he said in a preflight interview. He saidhe was especially excited for the mission's planned spacewalk, which he isslated to participate in.

After such a long lead up to his flight, Suraev said he'sthrilled to be finally approaching his liftoff date.

Surayev is married and has two daughters.

Expedition 20 commander Gennady Padalka and flight engineerMichael Barratt, a cosmonaut and NASA astronaut, respectively, are set to headhome with Laliberte Oct. 11. De Winne will take over as the newstation commander.

During the new crew's stay the space station will host twovisiting space shuttle missions and one new Soyuz launch, as well as a handfulof unmanned cargo ship arrivals.

Williams and Suraev are set to return to Earth in March2010.