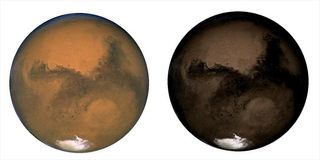 Mars may once have looked more like the image on the right, rather than the current, red version on the left, according to a new theory that uses wind erosion, not water, to give mars its ruddy color in the relatively recent past.
(Image: © NASA/ESA/Hubble Team)

Mars was not always red, according to a new theory for how the planet took on its characteristic ruddy hue.

"That was a surprise to everybody," said Jonathan

Now new research has found a possible mechanism to explain

To test the idea, Merrison and colleagues sealed samples of

The scientists then added powdered magnetite, an iron oxide

As the researchers continued to tumble the samples, they

"We think we have a process that explains how the dust

Hematite is an iron oxide that is deep red in color. It only

Though they can't yet prove that this is what happened on

In fact, since the process can occur relatively quickly, it

"I think it means that Mars wasn't always red,"

Merrison presented the results last week at the European