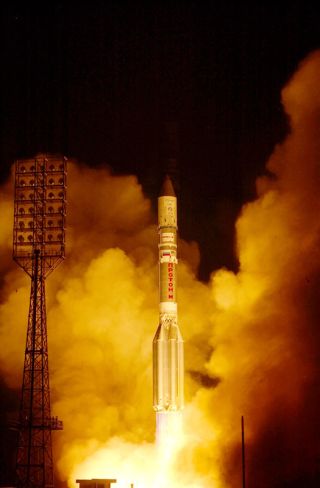 An International Launch Services Proton rocket blasts off with the Nimiq 5 satellite on Sept. 17, 2009 from Baikonur Cosmodrome, Kazakhstan.
(Image: © ILS)

A Canadian commercialcommunications satellite was shot into space from the famed Baikonur Cosmodromeon Thursday to serve customers across the United States who subscribe to theDISH Network.

The Nimiq 5 spacecraftlaunched at 1919 GMT (3:19 p.m. EDT) atop Russia's heavy-lift Proton rocket,beginning a steep climb aboard the four-stage booster.

Six main engines of theProton ignited to blast the19-story rocket away from the desert steppes of Kazakhstan. After firststage separation two minutes into flight, four engines aboard the second stagefired for three-and-a-half minutes. The Proton's third stage then came to lifefor its four-minute job, during which time the protective payload fairingshielding Nimiq 5 was let go after reaching the upper atmosphere.

The Proton booster's threecore stages delivered the upper stage and the payload into an initialsuborbital trajectory by T+plus 10 minutes. That set the stage for the Breeze Mupper stage to conduct five burns over nine hours that methodically propelled10,460-pound payload craft into the desired orbit for deployment, which wastargeted to have a low point around 2,897 miles, high point of 22,236 miles andinclination of 13 degrees to the equator.

The satellite's onboardengine system will complete the task of circularizing the orbit to an altitudeof 22,300 miles along the equator, and controllers will guide the craft into anorbital slot at 72.7 degrees West longitude.

Nimiq 5 is a large,state-of-the-art satellite built by Space Systems/Loral for operator Telesat ofOttawa, Canada. The craft is equipped with 32 Ku-band transponders to beamdirect-to-home programming and high definition TV across North America.

"We announced earliertoday that EchoStar is taking all of the capacity on Nimiq 5," said DanGoldberg, president and CEO of Telesat. "We want to thank EchoStar andtheir affiliate, DISH, for putting their trust once again in Telesat. They'realready one of our biggest customers and we're looking forward to expanding ourrelationship with them on Nimiq 5."

DISH Network relies upon aconstellation of orbiting satellites to satisfy the demands of its 13.6 millioncustomers.

Nimiq 5 is expected toenter service next month. It has a 15-year design life.

"The successful ILSProton launch of Nimiq 5 will assure reliable access to advanced digitalprogramming for North American subscribers and also assures the continuedexpansion of our business," Goldberg said.

"We appreciate theprofessionalism and dependability ILS and Khrunichev provided with anotherflawless ILS Proton launch. My sincere thanks to the entire team of ILS,Khrunichev, Space Systems/Loral and Telesat for their steadfast dedicationthroughout the mission and for a job well done."

The next ILS launch istargeted for mid-November carrying the W7 communications spacecraft forEuropean operator Eutelsat. The satellite recently switched rides after SeaLaunch, its original choice to deploy the craft, filed bankruptcy and couldn'tperform the launch as scheduled.

"ILS is uniquelysuited to meet demanding customer requirements and we are committed toproviding real business value to our customers," ILS President Frank McKennasaid in the contract announcement earlier this month. "Meeting Eutelsat'scritical schedule requirements with our leading edge integration and robustproduction capability allowed us to schedule the W7 launch within a timeframethat is simply unmatched in the industry."