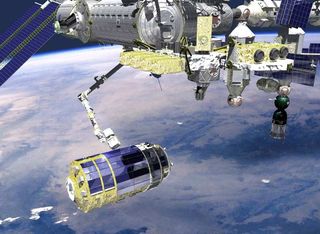 Japan?sfirst unmanned spacecraft to haul cargo to the International Space Station(ISS) is nearly ready for its maiden launch next week.

The newcargo ship is poised to launch toward the station on Sept. 10 at 1:01 p.m. EDT (1701 GMT) from theTanegashima Space Center in southern Japan on a shakedown cruise. If all goeswell, the inaugural spacecraft, called the H-2 Transfer Vehicle 1 (HTV-1),should arrive at the station on Sept. 17.

Thespacecraft was built by JAXA, Japan?s space agency, and will launch atop thecountry?s brand newH-2B rocket. It will be early Sept. 11 Local Time at the Japanese launchsite at the time of liftoff.

?JAXA isready to carry out the important HTV-1 mission as a new contribution to the ISSprogram,? said Masazumi Miyake, director of the JAXA office at NASA?s JohnsonSpace Center in Houston, in a Wednesday briefing.

JAXAmission managers are expected to hold a series of final readiness reviews forHTV-1 and its rocket booster to make sure it?s ready for launch day.

?There?svery little work to be done,? said Mike Suffredini, NASA?s space stationprogram manager. ?We?re all on schedule and we?re not working any issuesrelative to this launch."

Suffredinisaid that the new spacecraft, like cargo ships built by Europe and Russia, willbe vital to support the space station?s six-person crew once NASA?s space shuttlefleet retires in the next year or so.

The HTV-1cargo ship is Japan?s latest contribution to the InternationalSpace Station. Astronauts completed construction of JAXA?s enormous Kibolaboratory, a $1 billion facility the size of a tour bus, in July with theaddition of an exterior experiment porch.

Thespacecraft is a solar-poweredcylinder about 33 feet (10 meters) long and 14 feet (4.4 meters) wide. Itcan haul up to 6 tons of pressurized and unpressurized cargo to the station,but will only be packed with about 3 1/2 tons for its debut flight.

Unlike theautomated cargo ships built by Russia and Europe, which can dock themselves atthe station, the HTV-1 is designed to fly close to the orbiting laboratory andbe grabbed by its robotic arm. Astronauts inside the outpost will oversee theapproach, rendezvous and grapple.

After abouta month at the space station, the disposable cargo ship is expected to bedetached from the outpost and commanded to intentionallyburn up in the Earth?s atmosphere over the southern Pacific Ocean.

Miyake saidJAXA has spent about $680 million since 1997 to develop the HTV spacecraft. Thevehicle alone costs about $220 million, he said.

The newH-2B rocket launching the HTV-1 cargo ship is a more powerful booster derivedfrom Japan?s workhorse H-2A rocket, which the country has been flying since2001.

The HTVspacecraft will be controlled from JAXA?s Tsukuba Space Center, which is alsohome to the agency?s Kibo mission control center.

Japan hasuntil Sept. 30 to try and loft the HTV-1 mission from its seaside launch sitebefore its window closes due to the country?s off-shore fishing season. Thenext opportunity to launch the spacecraft after September is in February 2010,Suffredini said.